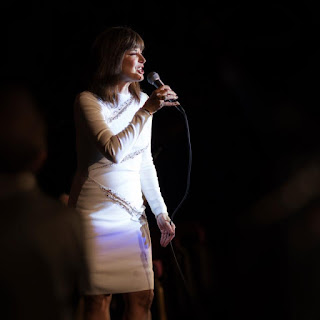 Bob Karlovits talks to the saxophonist Billy Harper about "sacrifice and paying some dues" when it comes to playing jazz, about the merit of working bands, and about teaching his students that playing jazz is not so much about just sounding "cool" but about "living jazz" ( Pittsburgh Tribune-Review ). --- Bill Beuttler talks to the pianist Robert Glasper about his trio album "Covered", about his attempt to connect people with musical repertoires they might not have been interested in before, about young musicians trying to play like him, and about writing the score for Don Cheadle's new movie about Miles Davis ( The Boston Globe).

Jeffrey Kaczmarczyk talks to the clarinetist Anat Cohen about her initiation to her instrument as well as to jazz, about possible reasons why the clarinet isn't as popular with young musicians, about Brazilian choro music, not Benny Goodman or Artie Shaw bringing her back to the clarinet after she had played the saxophone for a while, and about the importance of the melody ( MLive). --- Nate Chinen talks to the bass clarinetist Jason Stein who played as an opening act for his half-sister, the stand-up comedian Amy Schumer, about his upbringing in Chicago, about the trio Locksmith Isidore, but also about the challenge of reaching 14,000 people not quite familiar with avant-garde jazz in halls like the BMO Harris Bradley Center or the New York Madison Square Garden ( New York Times).

Christian Knatz talks to the German electric bass player Christoph Kaiser about the supporting role of his instrument in the band Jazz Pistols, about his road to the bass by way of cello lessons, about the decision to become a full-time jazz musician, as well as about the professional reputation in jazz being more important than any diploma ( Echo Online). --- The German WDR Big Band has a new chief conductor in the saxophonist Bob Mintzer and a new composer in residence in Vince Mendoza, both of whom have been working with the big band in special projects already ( WDR).

Franziska Buhre is not happy with the fact that the catalogue for the Stuttgart exhibition "I Got Rhythm" documenting the influence of jazz on visual art (painting) fails to define what constitutes jazz "as a musical sensation" and thus has a hard time finding convincing correlations between the two art forms ( Blogs TAZ). She then looks at the predominantly male views of Josephine Baker in contemporary drawings or paintings, asking about the importance of improvisation in her art and concluding that her dance could be considered jazz. --- On the occasion of his 100th birthday Stephen Holden pays tribute to Frank Sinatra, "the first modern pop superstar" who canonized the American songbook ( New York Times), while Ben Ratliff and Nate Chinen talk to Iggy Pop, Gaetano Veloso (sic), and Kurt Elling about vintage Sinatra performances ( New York Times).

Sharad Kohli talks to the saxophonist Rudresh Mahanthappa about the hybridity of jazz as a truly American art form, about his friendship with Kadri Gopalnath who introduced the saxophone to Carnatic music, and about his wish to make music for children ( Times of India). --- Dave Osborn talks to the trombonist Robin Eubanks about his influences from jazz through soul and funk, about gigs playing on disco and hip-hop albums, and about the need to practice because "you can't be a faint of heart learning to play an instrument" ( Naples Daily News).

The German pianist Sebastian Sternal received the annual award of German music critics for his album "Sternal Symphonic Society, Volume 2" ( Schallplattenkritik). --- Andreas Moll reports about the German blues guitarist and singer Abi Wallenstein who turns 70 these days ( NDR). --- Klaus Mümpfer hears a tribute to Frank Sinatra by the singer Alexander Gelhausen and the big band of Mainz University, directed by Jiggs Whigham ( Allgemeine Zeitung). --- Tom Stieghorst reports that Herbie Hancock will perform on a jazz-at-sea themed transatlantic crossing of the Queen Mary 2 in August ( Travel Weekly). Herbie Hancock will also have a role in the sci-fi epic movie "Valerian" ( Deadline Hollywood). --- The John Coltrane Church in San Francisco is concerned it may be pushed out of its home in the West Bay Center ( San Francisco Bay View). --- Alex Haley interviewed Miles Davis in 1962, and the Playboy interview is reprinted on Haley's Website ( Alex Haley). --- Rich Bockman reports about the former Miller Grand Ballroom in Williamsburg which has been converted into rental apartments ( New York Times). --- Rick Karr talks to the trombonist Jacob Garchik about his new album "Ye Olde" ( NPR). --- Brian McCollum reports about a $7.5-million gift from a Detroit philanthropist to open the Gretchen Valade Jazz Performance Center at Wayne State University ( Detroit Free Press). --- Michael Cooper reports about the redesigned Mica and Ahmet Ertegun Atrium at Jazz at Lincoln Center in New York ( New York Times). --- Franziska Buhre looks at (and listens into) a relaunch of the German record label MPS ( TAZ).