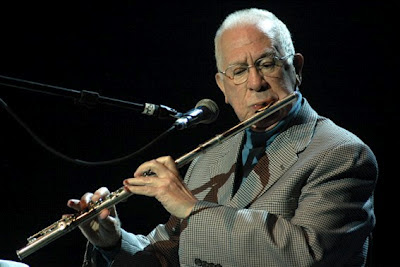 Brazil's greatest flute player ever. And one of the four best flutists in the history of music, alongside Hubert Laws, Jean-Pierre Rampal and Don Burrows. Besides hundreds of compositions and dozens of albums, he contributed as a producer and musician to such legendary sessions as "A Turma da Gafieira" (featuring Sivuca, Edson Machado, Raul de Souza and Baden Powell, amongst others), "Nova Geração em Ritmo de Samba" (feat. Eumir Deodato, Claudette Soares, Paulo Silvino) and also recorded a not yet released CD/DVD with Raul de Souza in 2011. Rest in Peace.
Posted by Arnaldo DeSouteiro at 11:24 AM