CD of the Week - "Copernicus: Nothing Exists" 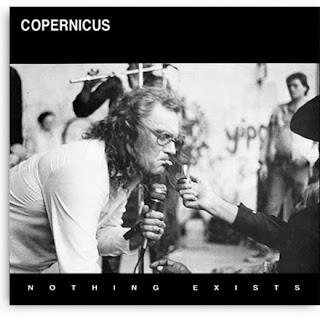 After releasing the critically acclaimed Copernicus' album disappearance in June 2009, nevermore Inc in association with MoonJune Records is releasing for the first time on the cd, COPERNICUS’ debut album "Nothing Exists."

Perhaps the most fitting way to describe Copernicus is as a performance poet. Even though he (originally named Joseph Smalkowski) plays keyboards, Copernicus refuses to be categorised as a musician. Despite often having inhabited the alternative New York rock'n'roll scene, his music also exudes strong elements of jazz, classical and the avant garde. Even though Copernicus' preferred recording strategy is that of improvisation, his epic pieces tend to revolve around themes, riffs and repeated clusters, moving along a clearly linear pathway.

The booming delivery and abstract texts evoke the spirit of classic beat generation poetry, but the Copernicus stance goes back even further to the theatrical confrontations of the Dada movement. He's always preferred the improvisatory approach, even though each poem's grist might be prepared in advance, their rhythms and content might be disassembled in the moment.
Copernicus has always been fiercely independent, since he first started recording in this manner, back at the dawn of the 1980s. He organizes the recording sessions, sculpts the assembled band, oversees the album artwork and releases each disc on his own Nevermore, Inc. label. 1985 brought "Nothing Exists," which emphatically laid out the themes of his subsequent work. A burst of creativity led to the swift succession of "Victim Of The Sky" (1987), "Deeper" (1989) and "Null" (1990). Often, Copernicus would perform with large-scale ensembles, but in 1991 he initiated the practice of giving completely solo performances, revealing his declamations in a stripped, confrontational space. He views himself as a conduit for abstract ideas and philosophical notions. Copernicus decided that his particular marriage of music and narrative was the best way to communicate his thoughts and concepts to a receptive audience.

He released "No Borderline" in 1993, but there was to be a longer gap before 2001's "Immediate Eternity" which moved in a completely different direction as its creator was spending increasing amounts of time in Ecuador, where the Spanish version of the album "La Eternidad Inmediata" was released the same year. The album is followed by 2005 releases of "Immediate Eternity II," "Die Sofortige Ewigkeit II" (in German), "L'Eternite Immediate II" (in French) and "La eternidad inmediata II" (in Spanish). Copernicus was evolving after having spent three years penning his book, also called "Immediate Eternity."

He linked up with Los Nomadas from Guayaquil, the country's biggest city, and his music moved temporarily more towards the zone of jazz-rock fusion. Now, with disappearance, Copernicus has made a return to the old established methods, refining them into what is probably his key distillation of an ongoing obsession with the freedom and beauty of nothingness.

Copernicus’s website: www.copernicusonline.net
"This album is dedicated to Emily Glen. Special thanks to Marcela Smalkowski without whom the original LP and also this remastered version would not be possible, and to Leonardo Pavkovic whose inspiration led to this remastered release." - Copernicus

Album Profile:
It was 1984, and Copernicus was making the transition from being a performance poet to declaiming in front of a full-scale band of musicians. He'd started to play with the saxophonist Melody Peach, in poetry circles, and around the New York City rock club scene. Then, Copernicus witnessed Larry Kirwan and Pierce Turner (both of them multi-instrumentalists) in an East Village joint. He suggested an immediate collaborative piece, and from this point the threesome went on to make up a performing nucleus. Copernicus would mostly appear below 14th Street, the Downtown home of all crucial art in NYC. He'd be found at Max's Kansas City, CBGB, Speakeasy, Mudd Club and Kenny's Castaways, making his intense pronouncements in front of a fluctuating cabal of improvisers. There was talk of recording an album, but Pierce Turner had a clear view of rejecting some run-down semi-professional operation. So, they went into the slick midtown RCA studios with fifteen musicians, spontaneously laying down the tracks that were to shape Nothing Exists.

"All of the Copernicus albums are really a documentation of the evolution of the artist as he confronts the quantum world," says Copernicus. "Nothing Exists established the foundation for all of the albums to come. Poor 1984 Copernicus, barely crawling out alone from the world of illusion with unsteady feet struggles to say what he thinks. In the first piece, apparently a normal love song, he injects the word Nevermore. We wonder, what is he talking about? Nevermore? What is that? He is putting his listeners on notice that possibly there is more of this Nevermore stuff to come. But he sets up his argument just with the mention of a Nevermore buried inside a love song."

I Won't Hurt You revolves around a whistling synthesiser figure, with a talkative bassline, as Turner repeats the chorus in the background. It's a deceptively poppy opener, calmly spreading a soft foundation for the confrontation that follows. Already, by the second track, Blood, matters are taking a more sinister turn as Fionnghuala Leahy's sweet-voiced background refrain is foregrounded by the increasingly agitated Copernicus, as reverberation pours thickly over his cries of "Blood!", bombastic drum crashes swirling in a dubbed-up ocean.

"In Blood, he talks about 'the kiss that could never be'," Copernicus continues. "The kiss symbolises life itself and here he is, getting more explicit in declaring that life does not exist. In the first line, he calls the sea the 'mother of the dream'. The entire piece is saying that it is the ignorance of 'nothing exists' that causes all of the war in the human world. He is coming out with his philosophy in a stronger way."

As I Know What I Think unspools, Copernicus is magnifying the intensity against a razoring guitar riff. "He is establishing his independence of thought from the world around him stating that he does not think like everybody else. He thinks for himself and he knows what his ideas have to say, and he is almost violent about it, challenging whomever."

Another aggressive riff backbones Quasimodo, as spectral church organ swirls emerge from a clanking roboticism. "Here we have the basic theme of all of his philosophy," Copernicus remembers. "He kills death in this piece. This is all we have in nevermore: the ability to be spontaneous in a truthful way. The uniqueness and courage and noble qualities of Quasimodo have given him the strength to be different and Copernicus compares his own struggle to the struggle of Quasimodo. And then he concludes with his 'nothing song' and a place where the 'barbarians will never conquer this Rome'. Nothingness cannot be conquered..."

In Let Me Rest, Copernicus has searched every environment of the globe, and after years of questing, he is exhausted. Violin and organ inject a heavy aura of mournfulness. "Driven by my own blank paper," he intones. "Driven into its own need to be felt and warmed." The ensemble comes to a halt, as Copernicus rants in front of bare piano shards. Then the players gradually return, making repeated crescendos as Copernicus muses on his own inertia. This is the spectacular centrepiece of the album, sprawling over eleven highly charged minutes. "Let me rest. Rest in the sand. Rest in the mud. Rest in the worst bug-ridden bed that I can find."

For Nagasaki, Copernicus has risen upright again, passionately frothing. The band is careening between Duane Eddy guitar twanging and Hawkwind analogue synthesiser eruptions. "This is the full declaration," says Copernicus. "He finishes the piece implying that by understanding the quantum world, you can get in harmony with reality and find inner peace and harmony."
The closing Atomic Nevermore is almost a return to performance poetry, with the band carefully building up their skeletal activity. "He bluntly and clearly sets out the rules of the 'nothing' struggle, and paints a future where all of humanity will realise the quantum world, and will adapt their daily activities to the reality of the quantum because 'living in illusion is an error and the cause of all human suffering'. No symbolism here. He talks about how humanity can move to the next level and the 'end of the illusionary human world'. Just step 'into atomic nevermore'..."
- Martin Longley
Posted by Arnaldo DeSouteiro at 9:16 AM