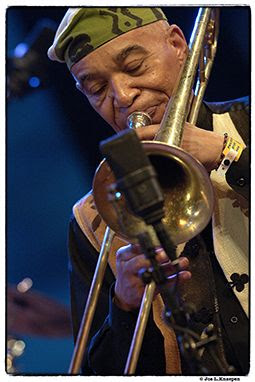 "Benny Powell is a journeyman trombonist whose bold sound bridges bebop and swing. His work employs the vocal color of great swing trombonists and the technical fluidity of bop practitioners. Powell plays both tenor trombone and the bigger-bored bass trombone broadening the colors he brings to an ensemble. Known exclusively as a sideman, he's made valuable contributions to several notable bands, ranging from the rocking swing of Lionel Hampton to the roots-informed avant-garde of John Carter," David Dupont wrote in the All Music Guide.