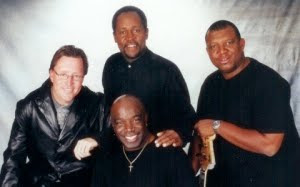 Fingerprints, known as "one of the best kept music secrets in the South," releases their long anticipated fifth CD, "Dream Life," on the Pacific Coast Jazz label. This project follows the enormous popularity of their last release, "DNA," and proves this contemporary jazz band deserves greater national and international recognition. On "Dream Life" the band delivers exceptional grooves, emotional energy and some of the most soulful covers around. According to bassist and leader Frederick Nichelson, "Some of our work is comparable to groups like The Crusaders and Pieces of a Dream, but we are careful to stay away from being over produced and seldom use midi-sequencing. We want to be known as a "real band" whose recognized sound of soul, blues and jazz have evolved through over twenty years of live performance."

However, what is most special about this CD is the fourth track, "I Am A Man" with inspiring vocals from Tim Jones. Memphis native Frederick Nichelson was honored to co-write the title song with Stax/Volt artist Deanie Parker for the documentary, "I Am A Man" (www.iamamanthemovie.com). Produced by the Memphis Tourism Foundation in partnership with Running Pony Productions and Old Bridge Media, the all-Memphis team also included Switch Creative, Electraphonic Recording and was written by Memphians David Appleby, Allison Graham and Steven Ross. The documentary is the story of one man, Elmore Nickelberry, and his fight for dignity, justice, and the power of the human spirit. Surrounded by the soul music that helped make Memphis famous, Mr. Nickleberry tells an uplifting life story of endurance and character as he is joined by the men and women of the 1968 sanitation strike whose courageous stand helped change the world forever. Dr. Martin Luther King supported their plight by saying to the public that "our society must come to respect the sanitation worker."

For many years standing room-only crowds have been lining up to hear the perfect blend of jazz and R&B by the Fingerprints musicians at venues and music festivals throughout the South and Southwest. Band members have recorded and toured in the past with highly respected artists such as Harry Connick, Jr., Marion Meadows, Ronnie Laws, Freddie Revel, Tom Browne, Miles Jaye, Wayman Tisdale, Roy Machado, Toni Redd, Brad Leali, Ardina Lockhart, Shelley Carrol and Kyle Turner. With a performance schedule of over 100 shows per year, Fingerprints still manages to find time to reach out to help the youth in the Memphis community through donated concerts to civic and non-profit organizations. "It is an important "mission" for the group to be able to share our music for the benefit of people," commented Nichelson. "Dream Life is a testament to the good fortune and pleasure we have to be making a living at our music while inspiring others to do the same. We express that enthusiasm every time we perform or record and hope that people feel the same joy we do."