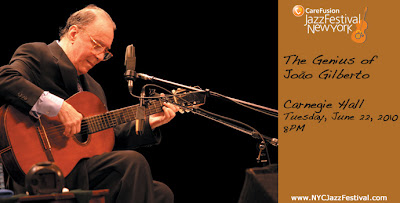 NEW YORK, NY, June 21, 2010, 7:53pm – Due to international travel regulations beyond the producer’s and artist’s control, the Joao Gilberto concert scheduled for the CareFusion Jazz Festival New York at Carnegie Hall on Tuesday, June 22, at 8:00 pm has been cancelled. Tickets will be refunded at point of purchase.

George Wein, producer of the CareFusion Jazz Festival, said, “I am heartbroken over this unfortunate situation. Joao Gilberto is one of the most important musical artists of our generation and it has always been a privilege to present him in Carnegie Hall. It’s very sad that this has happened. Since the opening sold-out concert with Keith Jarrett, the CareFusion Jazz Festival has been a success beyond all our expectations. We want to apologize for the many fans who have bought tickets for Joao.”

The festival will continue through Saturday, June 26, with paid and free concerts throughout New York City. The Herbie Hancock concert at Carnegie Hall on Thursday, June 24, which has limited tickets remaining, will be one of the musical milestones of the season.

Posted by Arnaldo DeSouteiro at 5:35 PM