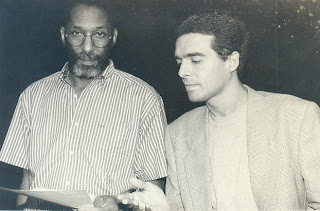 Charles J. Gans talks to Ron Carter (pictured above with producer Arnaldo DeSouteiro, during a recording session) about his time with the Miles Davis Quintet ( San Francisco Chronicle ). Carter still plays the Czech-made bass with which he arrived in New York in 1959 to study at the Manhattan School of Music. He would have wished his instrument to have been as audible then as it its now with all the technical help available, Carter says. Davis never really was disdainful to his audience while playing. If he turned away from the people it was because he stood sideways in order to hear the bass better. After all, Leonard Bernstein didn't face the audience when conducting an orchestra. Whenever an audience did not respond to a piece, Miles changed the program accordingly. Carter has recorded more than 50 albums under his own name and participated in more than 2.000. Only now he has decided to record a tribute album to Miles Davis in which it was important to him not to recreate the Miles Davis sound. He wants his audience to enjoy themselves with his music, says Carter who has been honored with a concert for his 70th birthday in June at the JVC Jazz Festival in New York.
Posted by Arnaldo DeSouteiro at 12:40 PM