Instrumental Jazz CD of the Month - "Ian Carey: Fire In My Head" 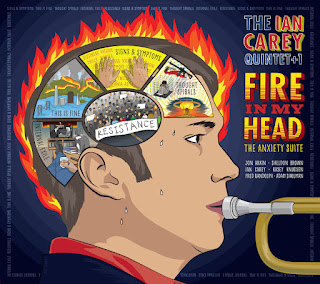 Bay Area trumpeter and composer Ian Carey has long aimed to blend the swing and virtuosity of jazz with the dense compositional textures of chamber music, but for his latest multi-movement creation, he turns that ambition towards a more personal topic. Fire in My Head (The Anxiety Suite) is the centerpiece of his new album, released by San Francisco’s Slow & Steady Records on April 24. Carey himself did all the artwork. The sessions took place at Tiny Telephone Studios (Oakland, CA) on August 7 & 8, 2019, engineered by Jacob Winik.

“Normally I write a piece and try to figure out what it’s about later,” Carey says, referring to his previous long-form work, Interview Music (released in 2016 on Kabocha Records). But when he received a grant from Chamber Music America to compose a new suite, he decided to pick a subject close to his heart: anxiety. It’s an affliction he’s long been familiar with, but for the last few years—since the election of 2016, to be exact—it’s one he shares with almost everyone he meets. That includes the members of his band, the Ian Carey Quintet+1: alto saxophonist Kasey Knudsen; bass clarinetist Sheldon Brown; pianist Adam Shulman; bassist Fred Randolph; and drummer Jon Arkin. “The emotions behind the piece were not a stretch for any of us,” Carey says. “That helped—maybe not so much for our mental health, but for the music.” (The advent of COVID-19 has put to rest any hope of that state of anxiety ending any time soon.)

The piece, which was premiered at the SFJAZZ Center in San Francisco in 2018, is a 50-minute, five-movement tour de force and Carey’s longest composition to date. It is a vehicle for both his intricate writing and the improvisational chops of his group, previously heard on Interview Music and 2013’s Roads & Codes, which received praise from DownBeat and NPR and appeared on many critics’ best of 2013 lists. 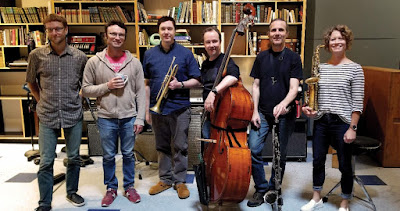 The album opens with the evocative chorale of “Signs and Symptoms,” which segues into a loping 5/4 groove featuring improvisatory introductions from the band, intertwined with increasingly tense variations on the theme. Inspired by a run by Carey on the “undeservedly beautiful” morning after the shattering 2016 election, the movement ends with an explosive drum solo, which sets the stage for the aggressive swing of “This Is Fine,” with its instantly identifiable roots in the “Young Lions”-era bop of Carey’s youth. The title refers to KC Green’s ubiquitous cartoon featuring a dog calmly drinking coffee as flames surround him; appropriately, the tune is a burner, with solos by Shulman, Carey, and Randolph.

From its obsessive Fender Rhodes vamp to its expansive bass clarinet solo and combative trumpet/alto dialogues, “Thought Spirals” evokes the mental maelstrom of its title. Describing the movement’s genesis, Carey recalls, “I just threw my hands on the keyboard, looped it, and happened to like the way it sounded—that got me thinking about ‘spirals.’ It reminded me of what goes through my head when I’m trying to sleep!”

While a peaceful three-part canon sets the mood of “Internal Exile”—a portrait of withdrawal into oneself for self-care during anxious times—that mood soon dissipates in the movement’s twitchy, nagging central passage: a reminder that despite efforts to detach from the world, we still have to live in the reality of it.

Tense but with flashes of rousing optimism, “Resistance” marks the acceptance of reality and the determination to grapple with it. “It sums up everything that’s happened and corrals it into something like a protest anthem: ‘Get up, brush yourself off, let’s go,’” says Carey. After revisiting themes from earlier movements and offering final solo statements, the suite ends with a pyrotechnic display from Knudsen over what a bassist friend of Carey’s called a “classic garage-band bass line.” 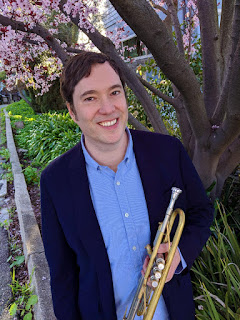 Born in upstate New York, Ian Carey, 45, lived in Northern California before moving to New York City in 1994, where he attended the New School (studying composition with Bill Kirchner and Maria Schneider, and improvisation with Reggie Workman and Billy Harper). During a productive seven years in New York, he performed with musicians as varied as Ravi Coltrane, Ted Curson, and Eddie Bert. After relocating to San Francisco in 2001, he soon met the musicians who became the core of his ensemble (heard on 2005’s Sink/Swim, 2010’s Contextualizin’, plus Roads & Codes and Interview Music), while hustling day work as a designer/illustrator—expertise he used to create this album’s vibrant comic-art–inspired cover, featuring visual portrayals of the piece’s five movements as regions of his own flame-engulfed brain.

While politics were a catalyst in the composition of Fire in My Head, the work is not specific to that context; it’s an examination of the psychological and physical experience of anxiety, now more than ever a widely relatable topic. Carey’s extended forms are stacked with hooks, grooves, and improvisational smarts that can be as universally appreciated as the subject itself.  •

Fire in My Head has been made possible with support from Chamber Music America’s New Jazz Works program, funded through the generosity of the Doris Duke Charitable Foundation.
Posted by Arnaldo DeSouteiro at 10:15 PM