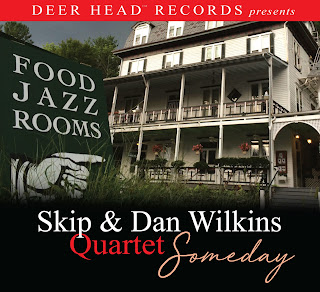 "Someday" features father-and-son duo Skip & Dan Wilkins alongside Tony Marino on bass and Bill Goodwin on drums. Through elegant performances of oft-overlooked compositions from the Great American Songbook, this superb quartet offers its love letter to the historic Deer Head Inn of Pennsylvania, the oldest continuously running jazz club in the country. The album was engineered in December 2017 by Paul Wickliffe.

A stunning interplay of the ensemble and musical selections curated by Skip & Dan celebrate the classic sound of the saxophone quartets of years past.  Warm, dulcet melodies from Dan’s tenor adorn the harmonic invention emanating from Skip’s keys. Along with Skip and Dan is the stellar rhythm section of bassist Tony Marino and drummer Bill Goodwin, famous for his long time association with Phil Woods.

The serenity offered by the quartet throughout "Someday" brings the listener into the spirit of the historic Deer Head Inn.  Skip Wilkins is no stranger to this prized Poconos institution, in fact, since 2012 the pianist has lived in the upstairs apartment in the Deer Head Inn’s original carriage house, and prior to that, the Inn served as a getaway for Wilkins and his family.  Both of his children, including Dan, enjoyed debut performances at the club.

Drummer Bill Goodwin -- whom I love since 1980 when I first attended one of his concerts with Phil Woods at the São Paulo/Montreux Jazz Festival -- is a fellow resident at Deer Head Inn, and Skip seized this moment to record with his neighbor, along with his son Dan on tenor saxophone as well as long-time collaborator, bassist Tony Marino. A master in subtleties and dynamics, like the late Billy Higgins, Goodwin also founded and directed a cult label, Omnisound, which released some outstanding albums in the 80s.

"Someday" begins with an effortless, beautiful rendition of Ross Parker & Hughie Charles’ “We’ll Meet Again,” a bright-tempoed jubilant swing tune.  Father and son team Skip and Dan Wilkins perfectly complement each other’s sound. Skip says “It is a special delight to work on music with my son Dan.  You could say that we both have old souls. We both love the canon – the Great American Songbook. We often exchange favorite old songs as well as favorite versions.  I’ve written music for Dan that we’ve recorded on previous CD releases, keeping an ear out for what he does so well in writing those pieces. But this recording proceeded differently, because Dan and I selected the material together.  In my career I have been fortunate to play and record with many great saxophonists both in the U.S. and in Europe, even including two NEA Jazz Masters. But for some music, you just have to grow your own saxophonist.”

Demonstrating the scope of the ensemble, the quartet offers a laid-back latin groove on Jerome Kern and Dorothy Fields’ “Remind Me” which hearkens back to Page One era Joe Henderson.  Skip demonstrates his facility on the keys with a masterful improvisation on Kern’s classic changes.  Another sultry selection from this release is “If Somebody Comes Ever Again” by Alec Wilder and Johnny Mercer.  This tender ballad in a waltz feel features some of the more dynamic interplay on this album – Skip’s piano comping for bassist Tony Marino’s solo is a study in counterpoint, and drummer Bill Goodwin’s support and anticipation throughout Skip’s solo is a masterclass in rhythmic ingenuity.

Dan shines on the Tucker Freeman/Sunny Skylar composition “You’ll Always Be the One I Love” with a marvelous melodic exploration that reminds one of the tone and time-feel of Dexter Gordon, fitting for the melancholy musings of the piece.  The album ends with the group’s interpretation of Cole Porter’s “Dream Dancing.” The track features burning solos from the father and son duo, ending "Someday" on a high. With the final notes of this driving swing tune, one can’t help but be transported back to the feeling of a late Saturday night in the Poconos at the Deer Head Inn, the room abuzz with the afterglow of an amazing set of live music, the shouting of the bartender’s ‘last call’ and the applause of a delighted audience.

Skip Wilkins was born in Massachusetts and raised in a musical family. He became interested in jazz at an early age and found his way to the stage in kindergarten. He learned to love singing, played drums for years, but then focused on piano, which became his main instrument by his late teens. As he was coming up in Boston, he worked with drummers Joe Hunt and Bob Moses and with saxophonists Jimmy Mosher and John LaPorta.

For many years, Skip has maintained an active international career as a pianist, composer, vocalist, workshop presenter, jazz choral director and college professor.  He has fourteen CD releases, including multiple international recordings, and has enjoyed performances with a host of international luminaries throughout his career. He performed often with Phil Woods, and is a featured soloist on Phil’s final big band release "New Celebration."

Wherever he has lived, he has performed with and collaborated with top stars whenever they came to town – Phil Woods, David Liebman, Plas Johnson, Mark Murphy, Clark Terry, David Sánchez, Stanley Turrentine, Bobby Watson, Bob Dorough, Conte Candoli, Peter Erskine and Zuzana Lapčíková, among so many others.

Skip performs throughout Europe in a variety of ensembles, with regular tours to the Czech Republic, Germany, Switzerland, Austria, Slovakia, Italy, Greece and France.  He maintains a residence in Prague, Czech Republic, and another at Deer Head Inn. He is associate professor of Music at Lafayette College, where he teaches courses in music theory and jazz improvisation, and directs the Jazz Ensemble.

Saxophonist and composer Dan Wilkins is a graduate of Manhattan School of Music’s prestigious jazz program and has studied with some of the foremost educators in jazz including NEA Jazz Master Dave Liebman, Caris Visentin-Liebman, Phil Markowitz, Steve Wilson, Rich Perry and Garry Dial. He has performed throughout the United States as well as internationally. Wilkins musical voyage began early on, when his father first introduced him to the jazz tradition and legacy. Wilkins credits the luscious ballads of Stan Getz and Dexter Gordon for turning him on to the tenor saxophone.  Dan released his own debut album ‘Jnana Vijnana (Awake)’ in 2015 after first recording with his father Skip for the 2012 Steeplechase Lookout CD release ‘Father & Son’. Now, they start a new chapter on their careers.
Posted by Arnaldo DeSouteiro at 7:47 PM