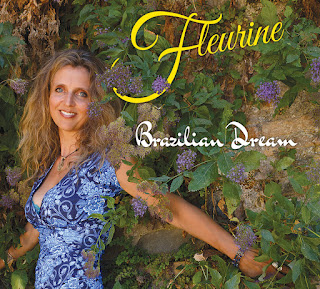 Fleurine, a vocalist beloved for her “warm, enveloping sound and gentle rhythmic drive” (Los Angeles Times) and her “cunning brand of vocal wizardry” (JazzTimes), is proud to present "Brazilian Dream," her fifth album as a leader and her second for the Sunnyside label. The album “elegantly leverages a Rio sound” according to JazzWax’s Marc Myers, who praises Fleurine as “a voice that will sweep you away.” In a first, the album features almost exclusively original material by Fleurine, save for a closing adaptation of Al Green’s enduring soul ballad “Let’s Stay Together” and a haunting waltz by guitarist Ian Faquini, “Contradiction – Contradição,” which features the first lyrics ever written by famed Brazilian composer Guinga, Faquini’s teacher and mentor. (The English translation is Fleurine’s.)

Having worked with noted producers Don Sickler on her debut album "Meant to Be!" and Robert Sadin on "Fire" and "San Francisco," Fleurine chose to produce "Brazilian Dream" entirely herself, wearing every possible leadership hat and taking charge of her sound and vision as never before. Several of the songs feature both Portuguese and English lyrics, and each song title is listed bilingually as well, as Fleurine explains: “I want to draw people into this dream and make sure they know what it’s about. I think it’s very important that people can connect to the music and the meaning of the lyrics.”

Of her wonderfully varied subject matter she adds: “I just grabbed everything that was around me. A bunch of family stuff is in there, children, people being far away all the time. But it’s not all about me: I grabbed stories of friends, things that people were going through. It was a very organic process. ‘Passion – Ausência de Paixão’ is about a friend who went on Tinder and had a date that went very wrong. The story was really funny and I made a lyric of it. Sometimes things are thrown your way.”

Fleurine’s unmistakable authority with Brazilian music stems in part from her Portuguese fluency, gained during summers in Portugal visiting her grandparents and great uncle. ADutch native, she led her first Brazilian cover band in her teens and went on to become the first singer authorized to translate into English the lyrics of the legendary Chico Buarque (which she presented on San Francisco). On "Brazilian Dream" she harnesses all the warmth, emotional power and textural beauty of the Brazilian jazz idiom in the service of her evocative original melodies.

She draws on various popular and folkloric genres, for instance samba on “Sparkling Gemstone,” with its fiery improvisational trading between Mehldau, Pinheiro and Fleurine; a variation of partido alto rhythm on “Passion – Ausência de Paixão”; bossa nova on “My King,” a loving ode to an unexpected protagonist; folk-pop balladry on “Sing Free! Caged Bird,” elevated by Potter’s gorgeous soprano; and baião, the animated dance feel from northeast Brazil, on “Dreaming – Sonhando,” which Fleurine thinks of as the album’s title track. The rich sound of Gonçalves’ accordion, the reed virtuosity of Potter, the nylon-string subtlety of Faquini, the flowing percussive rhythms and colors of Boccato, the tight arrangements of Rafael Piccolotto de Lima (strings and flute on “My King,” four horns on “Sparkling Gemstone”): Fleurine brings all this textural and timbral variety to bear on a set of uncommon beauty and polish.

Nearly all of the proceeds from "Brazilian Dream" are going to Estrela da Favela, a small idealistic school located in the rough Mangueira neighborhood of Rio de Janeiro. Translated as “star of the favela” (slum or shanty town), the school is “this little shining place in the middle of the favela,” Fleurine marvels, with a mission “to keep children off the streets and out of harm’s way, out of the reach of gangs who recruit kids very young.The school shows that through learning, you have other options in life.”

By financially supporting Estrela da Favela, Fleurine is giving back to Brazil, the country that has offered so much personal and artistic inspiration throughout her career. She had the opportunity to visit and conduct music workshops with the children there, and she plans to return. By coincidence, earlier she had written “Falling Stars – Estrelas Cadentes,” well before she knew about Estrela da Favela. It’s a melancholy yet uplifting song about our ability to shine like stars — not just for ourselves, but to cast that light on others as well. “That’s what I’m hoping to do with the school,” she adds, “to give them a chance to shine. And I’m hoping to do that with the members of Boys from Brazil, who represent a new generation of jazz talent that deserves much wider recognition.”

Fleurine first immersed herself in the New York scene in the mid-1990s, eventually settling in an apartment just steps away from Bradley’s, the storied jazz club and communal hang, now long defunct. There she struck up friendships with greats including Roy Hargrove, who schooled her on American culture and also enlisted her for a whirlwind tour of Cuba (in preparation for his Crisol project). She was soon landing engagements at Birdland, Jazz Standard and other top venues as well as the North Sea Jazz Festival, Umbria Jazz Festival, Montreal Jazz Festival and many more.

Following her sophomore release "Close Enough for Love" (EmArcy/Universal), a duo outing with Mehldau, she recorded "Fire" alongside the likes of Gil Goldstein, SeamusBlake and Peter Bernstein, as well as Mehldau and drummer Jeff Ballard in their first recorded encounter. On "San Francisco" she showcased Chico Pinheiro’s original compositions as well as those of Chico Buarque and Francis Hime, in the company of Chris Potter, guitarist Freddie Bryant, cellist Erik Friedlander, bassist Doug Weiss and percussionist Gilad. Her “effortlessly musical” work (The Guardian) on these outings has had a decisive impact, proving her “an artist to be reckoned with” (Die Welt), a figure who has consistently steered off the beaten track toward ever newer, more personalsounds.
Posted by Arnaldo DeSouteiro at 11:47 PM