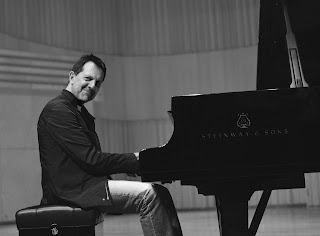 Alan Pasqua, a synonym for extraordinary musicality, is one of the most underrated pianists of our time. Although he has played and recorded with many musical icons of several styles - from Tony Bennett to Allan Holdsworth to Claus Ogerman & Michael Brecker -, Pasqua remains a treasure hidden by the "jazz experts." But, this next Friday, May 24, you can see for yourself how great he is, attending Pasqua's long-awaited acoustic jazz trio concert @ Moss Theater.

Alan Pasqua, Professor of Jazz Studies at USC, was born in New Jersey and began studying piano at the age of seven, playing both classical and jazz. He attended Indiana University and received his bachelor’s degree in jazz studies from the New England Conservatory. While performing a concert at Carnegie Hall, Pasqua met the legendary drummer Tony Williams. Pasqua was asked to join The New Tony Williams Lifetime along with guitarist Allan Holdsworth.

After recording two “Lifetime” albums for Columbia Records, Pasqua relocated in Los Angeles. His career in L.A. broadened as he started playing with more rock and pop artists. He has been a member of the bands of Bob Dylan and Santana. Some of his other pop album and touring credits include: Ray Charles, Aretha Franklin, Elton John and Queen Latifa. In addition, he has worked with composers John Williams, Quincy Jones, Dave Grusin, Jerry Goldsmith and Henry Mancini and on motion picture soundtracks. In addition, Alan composed the soundtrack for Disney’s hit movie, "The Waterboy," starring Adam Sandler.

Aside from his many critically acclaimed recordings as a leader, in 2008, Pasqua joined forces with Peter Erskine and Dave Carpenter, arranging, co-producing and playing on the Grammy Award nominated trio album “Standards”. Another critically acclaimed release, “Twin Bill” (BFM Digital) features Pasqua on two pianos, playing the music of Bill Evans.
Posted by Arnaldo DeSouteiro at 11:56 PM