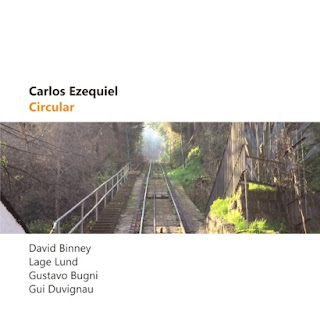 Bio:
São Paulo-based drummer, composer, arranger and producer Carlos Ezequiel works with Brazilian music and jazz since 1992. Born in Alagoas, in the northeast of Brazil, Carlos performed there actively in the early 90's. In 1996 he won a scholarship to study at Berklee College of Music, in Boston, where he got his Bachelor's degree in 1999. In 2014, he got his Master's degree from Universidade Federal da Bahia, presenting a research on Polyrhythms and Odd-Meters applied to Brazilian Rhythms.

In 2001, Carlos was nominated for the Visa Music Award in Brazil as Best Instrumentalist. He has been a sideman for such jazz artists as Lage Lund, Kurt Rosenwinkel, David Binney, David Liebman, besides many Brazilian jazz artists like Fernando Correa, Nelson Faria, Marcelo Coelho, and Daniel D'Alcântara.

As a producer, Carlos worked on “A Saga da Travessia” (Letieres Leite & Orkestra Rumpilezz), which won 3 awards at the Premio da Musica Brasileira 2017, including Best Album. He also produced Airto Moreira's new album, “Aluê” (2017), on which he also played drums.

Carlos is a faculty member at Faculdade Souza Lima in São Paulo, and is the author of “Melodic Interpretation for the Drumset”, “Baiao and Northeastern Rhythms”, and “Brazilian Music in Odd-Meters”, all released worldwide by Advance Music.
Posted by Arnaldo DeSouteiro at 9:29 PM