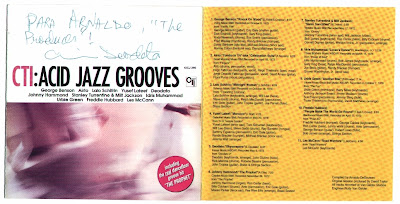 The CD you are holding in your hands is a very special compilation. It’s the celebration of CTI as one of the most “sampled” labels on Earth! For the past ten years, many CTI tracks have been cut up, sampled, scratched and looped to create new songs for a new audience. Many of the selections on this album (all of them produced by Creed Taylor and engineered by Rudy Van Gelder) represented the basic inspiration and major influence in the work of countless artists from the jazz hip-hop generation. And some of these tracks (most notably Idris Muhammad’s “Loran’s Dance”, Airto’s “Celebration Suite” and Deodato’s “Skyscrapers”) achieved the status of “contemporary dancefloor jazz classics”.

All the great artists in this compilation are revered by DJs, musicians, dancers, and consumers of the Acid Jazz community. Why? Because they play exhilarating music filled with soulful grooves. All kinds of grooves! “In the pocket”, “shake your booty”, “finger snappin’” and so on. Just listen to the opening track, Benson’s “Knock on Wood”, and you’ll find all the main ingredients of a true dancefloor hit: a burning jazz improvisation over a solid funky groove, spiced with soul sauce.

As my friend Larry Birnbaum wrote on the Down Beat February ’96 issue, “call it acid-jazz or hip-hop, but today’s funky dancefloor jazz (or jazzy dancefloor funky) owes as much to ‘70s jazz-funk as the young lions movement does to ‘50s hard-bop.” The fact is that the Acid Jazz phenomenon spawned an incredible amount of reissues which were responsible for the solo career resurrection of several artists – Idris Muhammad, Lonnie Smith, Les McCann, Yusef Lateef, Lou Donaldson and Johnny Hammond, to name a few. Even groups (Funk Inc.) and bands (Pucho & His Latin Soul Brothers) were reconstructed after years of obscurity.

It all began when British DJs started a new “movement” in the dance music scene. “Suddenly, reports were filtering back to the United States about kids in London dance halls moving to jazz recordings,” arranger Bob Belden once wrote. Mark Murphy told me that it was true, and, when I was preparing to travel to London in ’89, he gave me a list of clubs I should visit. “You’ll not believe in what you’ll see,” Mark advised me. Even so, I felt myself exultant and astounded!

As a natural consequence of this exposure of “old” jazz stuff to European teens, many rap and hip-hop artists began to sample introductions, bass lines and horn riffs from jazz tracks. Since this process was (and still is) a two-way street, many jazz heavyweights started to mix jazz improvisation with hip-hop grooves. Once again, jazz supreme genius Miles Davis showed the way on “Doo-bop”. One year after the posthumous release of Miles’ album, the Us3 group scored, in ’93, a monster hit based on Herbie Hancock’s “Cantaloup Island” and, voilà, the Acid Jazz international fame was guaranteed.

Although some purists and incredulous proclaimed the death of Acid Jazz the day it was born, the spirit behind it prevailed and Acid Jazz is currently accepted as a genre in the universal lexicon of genuine musical categories. Brazilian sounds of the ‘60s and ‘70s were incorporated in the idiom, the craze expanded to Japan (thanks are due to U.F.O., Kyoto Jazz Massive, Izuru Utsumi and DJ Krush, among others) and now we see some incredible partnerships: Flora Purim sittin’ in with Urban Species, Mark Murphy jamming with U.F.O., Ron Carter lending the bass and supplying the base to MC Solaar, Donald Byrd soloing over Guru, and Deodato arranging for Bjork. “There’s more people making Acid Jazz than ever before,” stated Straight No Chaser’s editor Paul Bradshaw. CTI proudly joins the club and releases “CTI: Acid Jazz Grooves”, definitely proving the viability of jazz as contemporary dance music. Check it out and surrender!

Our musical journey starts with George Benson’s crepitant version of Eddie Floyd’s ’66 hit “Knock on Wood”, gifted with an utterly infectious groove. Recorded in ’75 during the sessions that yielded the “Good King Bad” album, it was only released in ’83, on the “Pacific Fire” album, which never received widespread distribution. So, don’t feel guilty if you weren’t aware of its existence. It’s really one of the rarest CTI recordings. David Matthew’s arrangement clearly benefits from his experience with James Brown (someone remembers “Sho’ is Funky Down Here”?) between ’70 and ’73. The solos are by Benson (displaying his phenomenal technique) and Fred Wesley, Brown’s demoniac trombonist.

“For the jazz dancers of the ‘80s, Brazilian husband and wife duo, Airto Moreira and Flora Purim, have earned a status that others on the jazz scene reserved for the likes of John Coltrane,” decreed the Straighnt No Chaser magazine in 1990. This is the original version of their biggest dancefloor hit, “Tobo in 7/4”, retitled “Celebration Suite” (due to bureaucratic contractual reasons) when Airto expanded the batucada section and recorded it once again for Warner, in ’77. This high-spirited performance features Airto’s drum solo and the ingenious keyboard work of the underrated Uruguayan Hugo Fattoruso (on organ and Fender Rhodes electric piano), who wrote all the arrangements for Airto’s landmark album, “Fingers”, in ’73.

“Midnight Woman” is welcome for its simplicity and direct dancing appeal. This track comes from Lalo Schifrin’s second date for CTI in ’76 (“Towering Toccata”), including solos by Eric Gale, Joe Farrell and the leader himself on the Fender Rhodes. Eric Gale’s and John Tropea’s guitars complement each other beautifully, adding a special spice to the groove provided by Will Lee and Steve Gadd. It’s interesting to note how Lalo Schifrin (a superb arranger of personal identity) was, at that time, extremely influenced by Deodato and Bob James, musicians of a younger generation.

No such simple description fully explains the mind (and the spirit) of someone as intellectualized and complex as Yusef Lateef, who refuses the term “jazz” to define his music. A deeply religious man devoted to Islam, Dr. Lateef is also engaged in politics, civil rights and black nationalism. It’s very ironical that this “eccentric” master, who, for the last 15 years, has been refusing to perform in jazz clubs or any other place that sells alcohol, is one of the most idolized figures in a dancefloor scene that took its reference name from the “ecstasy” acid…! On this ’79 afro-tinged track from “In a Temple Garden”, which got a 4-star review in DownBeat, Yusef’s tenor sax is anchored by Spyro Gyra’s Tom Schuman on synths and Rhodes, with Randy Brecker (trumpet) taking a solo spot.

Deodato’s “Skyscrapers” is by now considered a dancefloor jazz classic. The Brazilian artist had just been transformed in a pop star (thanks to “Zarathustra”) when he performed this song in the USA for the first time, on April 20, 1973, on Creed Taylor’s “CTI 2001 Space Concert” at the Felt Forum of the Madison Square Garden. The audience response made him sufficiently confident as to include “Skyscrapers” on his next album (“Deodato 2”), inviting his touring band – featuring John Giulino on bass, Rick Marotta on drums, and John Tropea on guitar – to record it two weeks later at Van Gelder’s studio. The arrangement challenges the group to a frenetic performance that nevertheless maintain balance and control, with Deodato doing the synthesizer solo.

Johnny Hammond’s title track from “The Prophet.” Recorded in ’72, here’s another killer cut destined to provide instant excitement on any club crowd. Ron Carter’s deadly bass line, Billy Cobham’s thundering drums, Johnny Hammond’s fiery solo on the B-3, and the smoking attack of the brass section (these riffs are one of Alfred “Pee Wee” Ellis’ most immediately recognizable trademarks) generate an astonishing overall effect. “The Prophet” also features a tenor solo by Maceo Parker, Ellis’ frequent collaborator until the present days and another member of The J.B. Horns. It’s worth mentioning that, due to the renewed interest on his work, Johnny Hammond gave up his semi-retirement and is now back on the road!

Stanley Turrentine’s sax-appeal is displayed on “Sister Sanctified”. Weldon Irvine composed, arranged and played tambourine. It was Milt Jackson’s debut session for CTI in May ’72 (“Cherry”), seven months before he recorded the luxurious solo album, “Sunflower”. Both Turrentine and Jackson perform with an authority achieved through a lifetime of study and dedication to their instruments. There’s a real funky groove, settled by Bob James on the Fender Rhodes. A track with perfect vibe and infallible vibes.

Idris Muhammad sets up the rules of groovitation on “Loran’s Dance”. Bob James’ laid-back arrangement fitted like a glove for the DJs who were looking for more charming cuts. As dance tempos began slowing down in the late 80s, tracks like this one became cult-hits on the dancefloor jazz panorama. Grover Washington, Jr., who wrote this tune for Idris’ debut solo album on the Kudu label (“Power of Soul”), is heard on an excellent tenor solo, preceded by Joe Beck and Randy Brecker’s inspired testimonies. Little by little, the performance increases in intensity, but both Gary King and Ralph MacDonald are more discreet than ever.

Urbie Green’s velvety trombone “sings” Stevie Wonder’s “Another Star”, from a session (“The Fox”) arranged by David Matthews. It’s a captivating blend of jazz, funk and a proto-disco beat. Anthony Jackson, then a newcomer, stands out with unbelievable bass lines plus an exquisite solo. Jeremy Steig sounds unmistakable as usual, while Mike Abene uses the first melody phrase as a keyboard riff. Sue Evans colors the track employing several percussion instruments: shaker, agogô, bells and so on. When you think they’ve said all they had to say, Toots Thielemans suddenly appears to conclude the track in a mellow mood.

Thom Bell & Linda Creed were some of the greatest R&B hit makers of the early ‘70s. Many of their songs, anthems of “The Sound of Philadelphia” style, appealed to jazzmen, and Freddie Hubbard wasn’t immune to this healthful contamination. We shall contemplate the somber atmosphere of Bob James’ score, as well as Hubbard’s beautiful tone. Although recorded in ’72, this rendition of “People Make The World Go Round” only came out in ’75, on the “Polar AC” album, released when the trumpeter had already left the CTI label. In the meantime, however, Hubbard had the opportunity to record this song as a guest on Milt Jackson’s “Sunflower”. The version we’ve selected opens with Airto’s exotic jungle sounds, and develops over the unquiet beat of Lenny White’s drums.

The title track from Les McCann’s one and only album for CTI, “Road Warriors”, is a song of a special kind. Recorded in ’84 when the label was going once again to bankruptcy, only in Japan it was well distributed by King Records. In the USA, released on Creed’s new label Greenestreet, it’s considered a collector’s item. McCann is an exemplary case of how positively Acid Jazz affected so many careers. After a decade of ostracism, he became one of the most-in-demand musicians for live gigs in Europe. The October ’96 issue of DownBeat includes an article on which McCann discuss his tremendous impact on the Acid Jazz scene, mentioning that more than twenty of his tracks have been sampled by hip-hop producers and rappers. It’s not difficult to discover why. Woosh!! Nuff said…!

sounds good.. but where is the download link if any?..

Congratulations! is very interesting. I am french, I like CTI