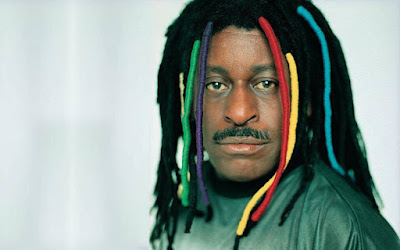 R.I.P.: Delmar Brown, who played and recorded with Miles Davis, Gil Evans, Quincy Jones, Sting, Hiram Bullock, Peter Gabriel, Chico Freeman, Jaco Pastorius, Pat Martino, Lew Soloff and many others, died yesterday, April 1st, 2017. Back in 1991, he was in my house (photo below) and watched for the first time his concert with Miles Davis & Quincy Jones playing Gil Evans' arrangements that had just been released on the LaserDisc "Live At The Montreux". I heard these sad news todays from guitar wiz Ricardo Silveira. Rest in Space, Delmar. (from left to right: Arnaldo DeSouteiro, Delmar Brown, Nacho Mena, Flavia) 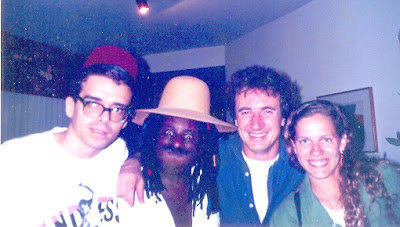 The ‘Delmar Brown World Pop Experience’ brings together exciting musical elements
from all over the planet and fuses them together to form a unique blend of music
which he himself has termed ‘World Pop’.

This vision of musical unification from many different cultural sources and American pop
music comes from a person whose life has always been surrounded by music from a
variety of cultures. As a young man, Delmar Brown was a shining star in Bloomington,
Illinois where he was active in church as a pianist, singer and organist. Delmar admired
the great jazz musicians of his youth, citing Jimmy Smith, Herbie Hancock, and Oscar
Peterson aniong his earliest influences. Gospel greats like Mahalia Jackson, James
Cleveland and C.L. Franklin were a large part of his earliest vocal influences.

After studying at Berklee College of Music, the training ground of some of the finest jazz
musicians today, Delmar went on to play and compose for some of the most influential
musicians in the global industry including Gil Evans, Miles Davis, Quincy Jones, Jaco
Pastroius,Pat Martino, and many others. Delmar’s travel experiences and love of the
music of the world brought him in contact with innovative pop musicians who included
elements of world music in their own music. Throughout the years Delmar has
collaborated with such notable figures as Sting, Youssou N’Dour, and Peter Gabriel.

Today Delmar Brown combines the smooth sound of jazz, the earthiness of world music
and the high energy of pop music to drive ‘The Delmar Brown World Pop Experience’,
mixing musical elements from the Caribbean to Eastern Europe. The music itself is truly
unique, and has the potential to reach deeply into one’s soul with its throbbing rhythm
and ‘grounded’ sound to touch and uplift you. When you listen to ‘The Delmar Brown
World Pop Experience’, your being will be so full of good feelings and energy that you’ll
want to experience it over and over again!

The latest CD from Delmar Brown is much like the future of music that trumpeter Dizzy
Gillespie predicted in his autobiography. In Dizzy’s book ‘To Be, or Not to Bop’, the jazz
icon describes the future of music to be ‘like a quilt with all of the worlds music
represented on the different patches. The World Pop Experience is akin to this quilt that
Dizzy anticipated many years ago. A quilt with patches of Brazilian rhythm, the pulse of
reggae, vocal influences of gospel, exotic sounds of Middle Eastern music, and the
vibrant drumming of Africa combined with American pop. The result is a compositional
soundscape that is contemporary, rich and fresh.

Delmar Brown, the driving force behind ‘The World Pop Experience’, packs this new
release with 12 original songs, from the Brazilian-influenced Bahia to the reggae
influenced Jah Man Jah. The performances aIways challenge musical boundaries and
skillfully blend diverse influences. ‘The World Pop Experience’ is Delmar Brown’s vehicle
to take his music of the world – to the world.
Posted by Arnaldo DeSouteiro at 5:35 PM