Blu-Spec Fusion CD Reissue of the Month - "Joe Farrell: Upon This Rock" 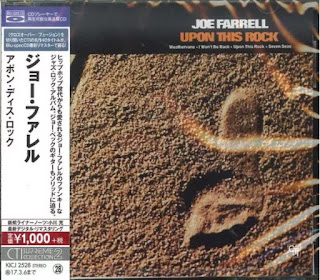 First CD reissue printed in Japan by King Records of this cult CTI album produced by Creed Taylor & engineered by Rudy Van Gelder, with a cover pic by genius photographer Pete Turner. Three tunes, including the the much-sampled title track (named by Creed Taylor, who loved to use sentences from the Bible; "You are Peter, and upon this rock I will build my church" - Matthews 16:18), were recorded in March 1974 with Joe Farrell's pianoless touring quartet at that time, featuring Joe Beck on electric guitar (great use of fuzz pedal, wah wah and other vintage electronic devices), Herb Bushler on bass and Jim Madison on drums.
A fourth track, "I Won't Be Back," my personal favorite, had been smartly saved by Creed Taylor from the "Penny Arcade" sessions recorded in October 1973 (the last time Herbie Hancock played on a CTI date), with the leader shining on flute, Hancock soloing beautifully on acoustic piano, Herb Bushler groovin' on bass, Steve Gadd (whose name, oddly, wasn't mentioned in the back cover of the original gatefold LP) playing as superb as always on drums, and Don Alias adding a latin-spice on congas. Much better remastering than the previous CD reissue by Wounded Bird label in the USA in 2011, when they used heavy compression, something completely unnecessary.

Btw, in June 2008 we had posted about a lawsuit filed by Joe's daughter, Kathleen Firrantello, in the U.S. District Court in New York, regarding unathourized sampling from the tune "Upon This Rock."
http://jazzstation-oblogdearnaldodesouteiros.blogspot.com/2008/06/joe-farrell-sampled-and-rappers-are.html
The rappers Kanye West, Methodman, Redman and Common have been sued by the daughter of the saxophonist Joe Farrell because they used parts from Farrell's composition "Upon This Rock" from 1974 without seeking permission from Farrell's estate (Reuters). The lawsuit will closely look at West's "Gone" from his album "Late Registration" (2005), at Common's "Chi-Chi" from his album "Be" (2005, coauthor and producer: Kanye West), as well as at "Run 4 Cover", a collaboration by the rappers Method Man and Redman from 1999 from their album "Blackout". Farrell's daughter seeks punitive damages of at least 1 million dollars and asks that no further copies of the songs be made or distributed.
********
CTI's top connoisseur already Doug Payne wrote about this reissue on his Sound Insights blog:
Upon This Rock captures Joe Farrell on record with his own 1974-75 quartet, featuring guitarist Joe Beck, bassist Herb Bushler and drummer Jim Madison. The piano-less assemblage is considerably more rock oriented than previous Farrell outings, no doubt inspiring the album’s title, and driven home by Joe Beck’s consistently rock-edged guitar attack. Still, it’s a quartet that not only sounds comfortable mixing good rock ideas with solid jazz figures, but one that coalesces especially well together.

The album’s title track in particular allows all four of the quartet’s members to contribute interesting commentary and is probably a highlight on an album brimming over with highlights. Upon This Rock is rounded out by Beck’s excellent 10-minute bossa fusion, “I Won’t Be Back,” recorded during the Penny Arcade sessions and nicely featuring Farrell on flute, Hancock sublime on piano and Beck, splendid on guitar.
To read the complete post, please visit:
http://dougpayne.blogspot.com/search?q=Joe+Farrell
***********
And that's what the guys from DustyGroove say:
Massive music from funky reedman Joe Farrell – quite possibly our favorite of his legendary 70s run for CTI – and that's saying a lot, given how great those records are! There's a lean, edgey groove to the set that's totally great – a lot more bite than usual for CTI, thanks to these wonderfully angular lines from Joe on tenor, soprano sax, and flute – backed up with some wicked guitar work from Joe Beck, who really matches Farrell's energy – in a core quartet with Herb Bushler on bass and Jim Madison on drums. One cut features a guest group – with Herbie Hancock on piano, Steve Gadd on drums, and Don Alias on percussion – and the album includes the massively break-heavy title cut "Upon This Rock", plus "Seven Seas", "I Won't Be Back", and "Weathervane".
Posted by Arnaldo DeSouteiro at 5:37 PM