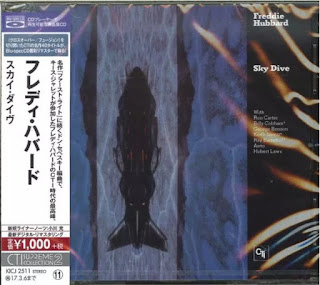 Like my friend Doug Payne wrote on his blog:

This beautiful composition (the title track) has much going for it, including a gorgeous line conceived by the trumpeter himself and an exceptionally subtle jazz arrangement provided by Don Sebesky that adeptly uses such soloist/accompanists as Hubert Laws (flute), George Benson (guitar), Ron Carter (bass) and Keith Jarrett (electric piano!) as part of the orchestration.

It’s so amazingly subtle that you don’t realize how craftily each musician is being employed to state their own piece.

While I prefer the performance of Sky Dive’s opening track, “Povo” as a musical performance – it’s not in the same league as “Sky Dive” nor can it compete with what Sebesky conspires with Hubbard to achieve here.

Sky Dive has many intriguing moments and a delightful diversity – especially for a 1970s jazz album – but it’s worth noting that Hubbard and Sebesky’s take of Bix Beiderbecke’s “In a Mist” from Sky Dive was nominated for a Grammy Award in 1973 (as was Hubert Laws’ Sebesky-arranged “Morning Star”), losing to the long-dead Art Tatum for his 1940s-recorded album God Is in the House.

Posted by Arnaldo DeSouteiro at 5:37 PM