SHM-CD Reissue of the Month - "Joe Sample: Voices In The Rain" 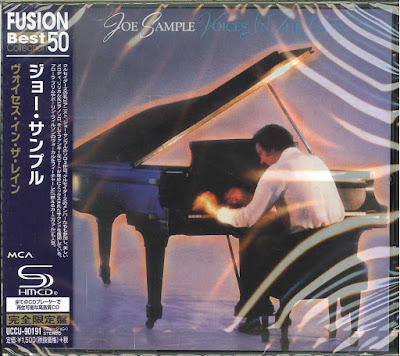 Crusaders' keyboardist and founder, the late Joe Sample, goes solo, funk and romantically mellow in this solo effort recorded during the group commercial heyday, after the mega-hit "Street Life."

Sample goes from soft funk ("Greener Grass," with a lovely Rhodes solo) to a heavy funk-samba ("Burnin' Up The Carnival" with lead vocals by Josie James and background effects by Flora Purim.) From the softly romantic title track ("Voices In The Rain") to the super mellow mood of "Sonata In Solitude," evoking Liberace's extravaganza on "Eye Of The Hurricane."

Actually, I never got the idea of Sample's direction on this album. A jazz-funk master trying to conquer easy listening audiences? It doesn't makes any sense.
Posted by Arnaldo DeSouteiro at 8:20 PM