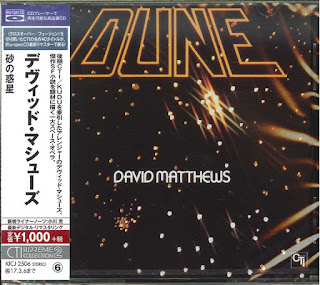 "Dune" is based on the Hugo award-winning novel, "Dune," by Frank Herbert.

The most eagerly-awaited reissue of the year! David Matthews' second and last album as a leader for Creed Taylor (the first one, "Shoogie Wanna Boogie," came out on CTI's subsidiary Kudu label), "Dune" was an artistically successful project who turned out to be a commercial fiasco thanks to the imprudence of CTI’s legal management.

Since CTI had not secured writer Frank Herbert’s authorization to use his novel "Dune" as the thematic center piece for the album, Herbert filed a law suit against CTI and won, forcing the label to delete it from catalog.

For this reason, that magnificent album was never reissued in the USA, although a CD reissue came out in Japan by King Records in 1994. And soon disappeared from the market.

Now, 22 years later, the album re-appears on CD format for the second time as part of the CTI Supreme Collection 2 that is being released next September 7. Once again, only in Japan. But this time buyers will have an easier way to order it from websites like Dusty Groove, Amazon and Ebay.

The four songs that appeared on Side B are all space-related, starting with my favorite version ever of David Bowie's "Space Oddity" (sung by the late and extremely underrated great vocalist Googie Coppola, with a trumpet solo by Randy Brecker). A mellow take on Peter Shickele's "Silent Running" (featuring David Sanborn and Grover Washington) follows.

"This 1977 album is, perhaps, Matthews's most singular statement of artistic greatness. You probably don't know anything about it because of producer Creed Taylor's insistence to tie the album to Frank Herbert's 1965 book Dune (which hadn't been turned into a film until 1984) - using Star Wars-styled typography. Matthews objected. But Taylor insisted. And Herbert, who died in 1986, sued this brilliant musical journey right out of existence - despite the music having absolutely nothing whatsoever to do with Herbert's work other than some obscure title cops.

Dune, though, is magisterial; undoubtedly one of composer, arranger and producer David Matthews' very best. Side one is a tremendously exciting Matthews suite featuring excellent turns by star soloists such as Grover Washington, Jr. (the oft sampled "Sandworms"), David Sanborn ("Song of the Bene Gesserit"), Hiram Bullock and Eric Gale.

The original LP's second side features several space-related covers, all expertly, if not astoundingly, arranged by Matthews, the surprisingly sumptuous "Silent Running" (the 1972 movie theme by Peter Schickele, aka P.D.Q. Bach, and host of NPR's Schickele Mix), the odd-choice of Bowie's "Space Oddity" (featuring the negligible Googie Coppola on vocals and Matthews's remarkably beautiful string work, which must be heard to be believed) and two inevitable covers from John Williams' Star Wars, both of which were issued on 45 at the time - and both far more engaging than the huge Meco single of the time.