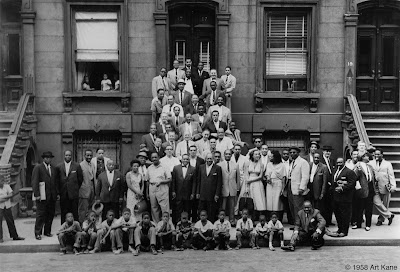 A Great Day in Harlem;iconic photo by Art Kane.

George Varga talks to the Cuban-born clarinetist and saxophonist Paquito D'Rivera about the internationality of music, about improvisation always being at the heart of his music, about the impact of hearing recordings by Benny Goodman when he was a kid, about the help he received from Dizzy Gillespie and James Moody, as well as about a recent invitation, dis-invitation and re-invitation to the White House, caused possibly by "his long-standing opposition to the Castro regime", and about his disappointment of the International Jazz Day event at the White House having been "too much of a pop concert" ( San Diego Union-Tribune). --- Ana Gershanik talks to the Honduran pianist Oscar Rossignol who moved to the USA in 2010 to study at Louisiana State University, has since won a number of competitions and has been honored by ASCAP as the 2015-16 Louis Armstrong Scholar at the University of New Orleans ( New Orleans Times-Picayune).

Thomas Staiber talks to the German pianist Volker Engelberth about his road to jazz, about his teachers Joerg Reiter and John Taylor, about influences from jazz and classical music, about his teaching concept at Musikhochschule Stuttgart, as well as about the Baden-Württemberg Jazz Award he received and what he plans to do with the award money ( Stuttgarter Zeitung). --- Troy Moon talks to the retired gastroenterologist and jazz advocate Norman Vickers about how he got into jazz, about some of his likes and dislikes, and reports that Vickers keeps the music alive in Pensacola, Florida, where he lives ( Pensacola News-Journal ).

Sarah Goodyear remembers "A Great Jazz Day in Harlem" , the photo session organized by photographer Art Kane in 1958 for Esquire magazine which brought together 57 jazz musicians of all ages and styles in front of a Brownstone on 126th Street in Harlem, New York, talks to saxophonist Sonny Rollins about the event, and to Noella Cotto who bought the house in 1999 and still lives there ( New York Daily News). --- Johannes Kaiser talks to the Syrian flautist Naissam Jalal about the political implications of her music, about her mix of jazz and ethnic musics, as well as about the experience of improvisation ( Deutschlandradio Kultur ).

We neglected Ethan Iverson 's excellent blog for a while which we think has a lot of thought-provoking material for both musicians and music lovers. Here are some recent posts, an interview with the saxophonist Charles McPherson ( Do the Math), a celebration of Albert Ayler who would have turned 80 a while ago ( Do the Math), an interview with saxophonist Houston Person (who told us that he was stationed in Darmstadt for a while, as a matter of fact) ( Do the Math), as well as an appreciation of the composer Hall Overton ( Do the Math). --- Zachary Kussin reports about a one-bedroom apartment in a New York Upper West Side property once owned by Miles Davis which has sold for $500,000 ( New York Post).

Verena Müller talks to the German saxophonist Angelika Niescier about the ensemble The Great Divide which she founded with the bassist Sebastian Gramss, the trumpeter John Dennis Renken and the drummer Christian Thome, about the repertoire of their program "Streben und Sterben" which deals with the sadness and melancholia of death and dying, as well as about the directness of emotional reactions to music ( Aachener Zeitung). --- Elly Gitau talks to the South African trumpeter Hugh Masekela about the reasons why he tried not to shake people's hands but instead hugs people at will ( The Star).

Tom Barnes talks to the pianist Robert Glasper about the difference between European and American audiences, about performing together with Herbie Hancock, about the new hipness of jazz, about being a jazz musician not meaning that everything he does is jazz, about the recent political awareness in music seeming like "a Harlem renaissance reborn", as well as about the myth that jazz does not reach young people ( Music Mic). --- Erin Arvedlund remembers the Philadelphia jazz scene of the 1980s and 1990s and talks to radio DJ Bob Perkins, jazz advocate Homer Jackson, trombonist Ernest Stuart, drummer Bruce Klauber, club manager Harry Hayman, and pianist Eric Mintel about the state of the current Philly jazz scene ( Philadelphia Inquirer).

George Varga talks to the singer Cécile McLorin Salvant about not having been a rebellious child, about her mother pressing her to keep learning to play the piano, about the connection she feels with her audience when she's onstage, as well as about how living in France after she was 17 helped her appreciate the history of jazz ( San Diego Union-Tribune). --- Katie Rogers remembers the singer and pianist Harry Raab who was known as Harry 'The Hipster' Gibson, talks to jazz historian Lewis Porter about the origin of the word "hipster", looks at the use of the word in the New York Times over the years and finds that most citations come from after 2000 and refer to "a class of people who moved to Williamsburg, Brooklyn, wearing tank tops and clutching cans of Pabst Blue Ribbon" ( New York Times).

The short summer break of the JazzNews is over already; and, as you can see, we prepared enough material to fill a newsletter.

Next Sunday (28 August) we will open the exhibition "The Jazz I've Seen" at 5pm showing pieces by Hans-Werner Hermann, Thilo Hofer and Thorsten Henz. The exhibition will open with a public talk with the artists in the cave underneath the Jazzinstitut. Visitors will be able to attend several guided tours of the Jazzinstitut's archive after that. From 6pm the Mainz-based saxophonist Kerstin Haberecht and her quartet will perform open-air on the square in front of the Jazzinstitut in a concert organized by Förderverein Jazz. The restaurant Belleville ("across from us") will serve food and drinks. All these events are free for all.
Posted by Arnaldo DeSouteiro at 11:57 PM