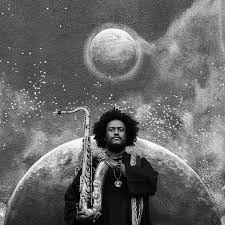 Christopher R. Weingarten talks to the saxophonist Kamasi Washington about the challenges of touring, about performing at places that usually don't feature jazz acts, as well as about the experience of going out of his musical comfort zone ( Rolling Stone). Steven Edelstone talks to Kamasi Washington as well who argues that "Music is actually more connected and more unified than people kind of realize" and explains that "genres are just words that describe certain aspects of music" ( SF Weekly). --- Geoffrey Himes attended this year's Newport Jazz Festival, and his review begins with this sentence, "The idea of Kamasi Washington is more interesting than his actual music"; then Himes cites some of the sets he favored more, such as the Charles Lloyd Quartet, the band of Christian Scott aTunde Adjuah, as well as Henry Butler's set with Steven Bernstein which culminated in a new arrangement of Duke Ellington's "Diminuendo and Crescendo in Blue", a legendary Newport performance from 1956 ( Paste Magazine).

Orli Santo talks to the Israeli bassist Or Bareket who curates a concert series with Israeli jazz at New York's Cornelia Street Café these days, about the connection between his home country and the Big Apple, and about the power of music especially when one leaves his home country, explaining, "It becomes something you can hold on to. Melody and rhythm and feeling become an existential need, an anchor. … They become your identity" ( The Jewish Week). --- Daniel Dresen talks to the German saxophonist and flautist Charlotte Ortmann about her career decisions after studying in Weimar, about the pros and cons of living and working, say, in Amsterdam, Cologne, or Hamburg, as well as about growing up in Remscheid ( Remscheider General-Anzeiger).

Lisa Rough remembers Louis Armstrong on his birthday, not just for his music but for his life-long love of marijuana, explaining how he first tried cannabis in the 1920s, how pot ended up in lyrics and titles of some of his tunes, about an arrest in 1930, about a famous (yet not confirmed) story of vice president Richard Nixon smuggling cannabis for him, about the arrest of his wife Lucille for the possession of one cannabis cigarette in 1954, and about why he eventually cut down on what he used to call "Mary Warner" ( Leafly). --- Alessandro Marazzi Sassoon reports about the jazz scene in Phnom Penh, Cambodia, about the success or failure of different clubs and jazz bars over the last years, about the need to develop a local musicians' scene, as well as about the newly opened Jazz Club Phnom Penh ( Phnom Penh Post).

Matt Schudel reports about the late photographer Herman Leonard who started taking pictures at New York jazz clubs in the 1940s, about how his view of jazz shaped the image of the music, about how his jazz pictures were forgotten for a long time until he rediscovered them for a gallery show in London in 1988; Schudel also focuses on some specific iconic Herman Leonard pictures which can be seen at the National Portrait Gallery in Washington, D.C., these days ( Washington Post). --- Barry Davis talks to the Israeli saxophonist Shauli Einav about his seven years in Rochester and New York, about his latest CD "Beam Me Up", inspired by the Russian composer Sergei Prokofiev, about his road into jazz as well as about the influence of saxophonist Arnie Lawrence ( The Jerusalem Post).

David M. Greenberg looks at genre labels in music and explains that they are merely umbrella terms; he also reports about a different classification system of music measuring the energy level ("arousal"), the emotional spectrum ("valence"), as well as the emotional depth within the music ("depth"), finding that this system might explain why people react positively or negatively to music across genre borders ( The Conversation). --- Nate Chinen collects current examples of jazz musicians who take a political position through their music, starting with Terence Blanchard's "Breathless", recounting historical examples from Louis Armstrong through Max Roach, then citing examples from musicians such as Vijay Iyer, Kris Davis, José James, Ambrose Akinmusire, Christian Scott, or the trumpeter Keyon Harrold from Ferguson, Missouri, quoting Blanchard's announcement at a recent concert, "We hope we are a small part of the healing process. Love triumphs over hate, every time" ( New York Times).

Ulrich Stock hears the reissue of John Coltrane's Atlantic albums ( Die Zeit). --- Rick Bentley talks to the singer and pianist Harry Connick Jr. about a daytime talk show he is planning to host ( The Fresno Bee). --- Michel Schultheiss talks to the saxophonist Victor Cuica who is well known in Venezuela and performs as a street musician in Switzerland whenever he visits his daughter and grandchildren there ( Tageswoche). --- Michelle Pekarsky reports about a mural planned in the jazz district of Kansas City , designed by a local artists but hoped to be added to by the community ( Fox4KC). --- Josh Cohen reports about the former "Maxim's" in Seattle which its new owners want to rename "Black and Tan Hall" in honor of a major jazz venue of the 1930s through 1950s ( Crosscut). --- Benjamin Eyssel talks to the German bass player Martin Zenker about teaching young musicians in Ulan Bator, Mongolia ( Deutschlandradio Kultur ). --- Jon Caramanica talks to the former New York Times critic Ben Ratliff about his time with the newspaper and his ethics as a critic ( New York Times). --- Faith Dawson reports about Bruce Raeburn, director of the Hogan Jazz Archive at Tulane University, New Orleans, who received the "Spirit of Satch" Jazz Education Award during Satchmo SummerFest ( Tulane University). --- Harald Hordych reports about an interview he had with the German trumpeter Till Brönner (the interview itself only to be read behind a paywall) ( Süddeutsche Zeitung ). --- Fadil Aliriza sees similarities in the origins of Tunisia's stambeli music and American jazz ( Foreign Policy). --- Oliver Hochkeppel hears the German saxophonist Stephanie Lottermoser at Unterfahrt, Munich ( Süddeutsche Zeitung).

Obituaries
We learned of the passing of the clarinetist Pete Fountain at the age of 86 ( KWWL, The New Orleans Advocate , The Sun-Herald, New Orleans Times-Picayune, Washington Post, New York Times, Los Angeles Times), the gospel singer Jo 'Cool' Davis at the age of 63 ( WWLTV), as well as of  Celia Mingus Zaentz, who was married to Charles Mingus with whom she ran Debut Records, and to Saul Zaentz who owned Fantasy Records (Info from: Larry Appelbaum).
Posted by Arnaldo DeSouteiro at 12:20 AM