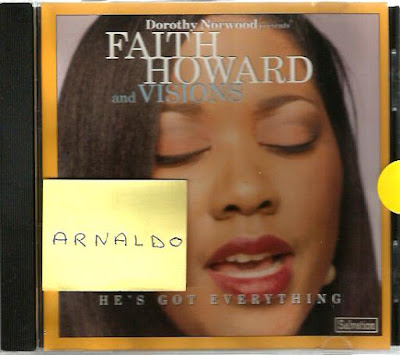 A wonderful gospel singer, Faith Howard is a native of Chicago. She is the protégé of “The Queen of Gospel Music,” Albertina Walker, and was the first recipient of the Albertina Walker Foundation Scholarship for the Creative and Performing Arts. She was discovered by Creed Taylor, who signed Howard to CTI Records' subsidiary label, Salvation. Ms. Howard currently serves as one of the praise and worship leaders at New Life Covenant Church, under the leadership of Pastor John F. Hannah. Ms. Howard has lent vocals to many gospel artists, including Yolanda Adams, Bishop Walter Hawkins, CeCe Winans, Marvin Sapp, DeWayne Woods, Shirley Caesar, Kurt Carr, Albertina Walker, Jessy Dixon and Walter Whitman and The Soul Children of Chicago, to name a few.

Faith Howard has also appeared with Ashford and Simpson on the "Oprah Winfrey" show, in Carnegie Hall with Visions, and with Peabo Bryson, Roberta Flack, and James Ingram. She was a featured artist at the 1995 Chicago Gospel Festival and has performed many times on BET's "Bobby Jones Gospel Hour," She continued to make appearances with Yolanda Adams and Albertina Walker.

This CD-single, with 4 tracks suggested to radio airplay, was part of CTI Records' marketing campaign to the release of "He's Got Everything," the debut album from this rising star. Released on CTI's Salvation label, it was produced by gospel icons Dorothy Norwood and Albertina Walker, with artwork by Blake Taylor. Dorothy Norwood had already five Gold Records to her name, and Albertina Walker won a 1995 Grammy Award for the album "Songs of The Church: Live In Memphis."

Born in Atlanta, Georgia, on May 29, 1935, Dorothy Norwood began singing and touring with her family at the age of eight. In 1956, she moved to Chicago, Illinois, and was soon singing with such notables as the great Mahalia Jackson, the world renowned Caravans, and the incomparable Reverend James Cleveland. Evangelist Norwood launched her solo career in 1964 and recorded her first album Johnny and Jesus on Savoy Records. It brought her national attention and was certified Gold. She followed it up with the stirring Denied Mother, which also went Gold, and earned her the title "World's Greatest Storyteller".

In her over 36 years in the Gospel Music Industry, Dorothy has recorded over 40 albums, five of which were certified GOLD. She has also received numerous awards and citations, including six Grammy nominations. As renowned as she is in America, she is just as large in Europe. She has performed in Germany, France, Sweden, Denmark, Holland, and England. Believing that "if the mountain won't come to you, then you must go to the mountain…" Dorothy agreed to do a 30 state American tour with Mick Jagger and The Rolling Stones in 1972. She was able to spread the Gospel in a mission field that was virtually closed to gospel artists.
In February 1991, Evangelist Norwood signed with Malaco Records and recorded Live with the Northern California GMWA Mass Choir. It was an immediate hit, reaching the Number 1 position on Billboard's Top Forty after only 7 weeks. Her second project earned a Stellar Award nomination as well as a Grammy Award nomination. Every album released since, has been nothing short of miraculous, propelling Dorothy further into the ranks of greatness. In 1996, Dorothy produced the debut album of a new gospel sensation, Faith Howard, released on CTI Records' subsidiary Salvation label.

Her 2007 album, entitled No Request, is a memorable, powerful release recorded "Live" in Jackson, Mississippi with the internationally renowned Mississippi Mass Choir. Ms. Norwood's talents are many; not only is she the vocalist we all know and love, she is a songwriter and very sought after producer. Whether she is with a choir, or her own group, this Gospel Storyteller has an amazing capacity to offer her gifts to God in a most refreshing manner. Because of this, she has become one of the most sought after Gospel artists of today.
Posted by Arnaldo DeSouteiro at 11:01 AM