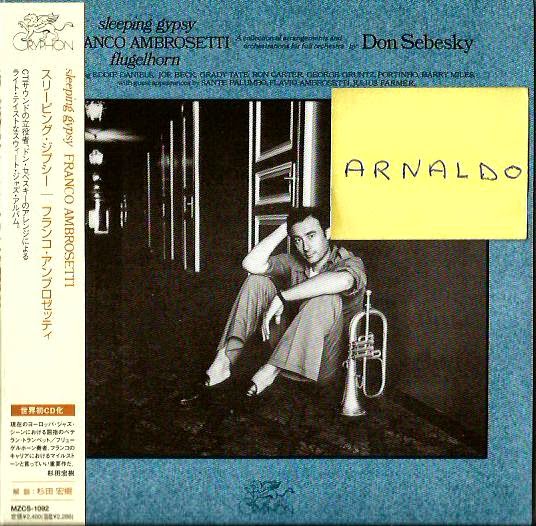 Ambrosetti's best solo album ever. At the height of his powers, the Swiss trumpetist shows why he is one of the top all-time flugelhorn players, alongside Clark Terry, Art Farmer, Freddie Hubbard and Chuck Mangione. Don Sebesky provides sumptuous scores in the lush CTI style, and contributes with two original tunes: the haunting title track "Sleeping Gypsy" (the guitar intro recalls the Jay Berliner performance on "For Someone I Love," from the Sebesky-arranged Milt Jackson's "Sunflower" album) and the fusion-oriented "Lugano Lady."

There's also an inspired version of Hoagy Carmichael's "Skylark" (a tune he had arranged for CTI sessions by Paul Desmond and Roland Hanna, this time a vehicle for a great solo by Eddie Daniels on tenor), and lovely ballads by Stephen Sondheim ("Johanna") and Tito Fontana ("Demoiselle.")
Posted by Arnaldo DeSouteiro at 8:30 AM