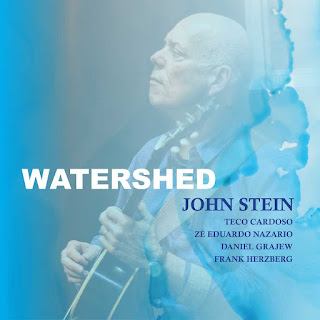 A brilliant new release that already deserves to be considered one of the best albums of the year! Classy, sultry, elegant and sensual performances by guitarist John Stein and his flawless Brazilian band, which features Zé Eduardo Nazario on drums, Daniel Grajew on piano & keyboards, reedman Teco Cardoso and the São Paulo-based German bassist Frank Herzberg.

The brilliant repertoire includes many ingenious originals by Stein such as "Brazilian Hug" (that evokes "The Good Life") and "Wally," my friend Bobby Scott's "A Taste of Honey" (a twice in a row pop hit when recorded by the Beatles and Herb Alpert in the 60s), Jim Hall's pretty & hip "Waltz New" (a showcase for Herzberg's improvitional talents), Pat Martino's intrincate "Cisco" (Hall and Martino are big influences on Stein), Henry Mancini's ultra-sophisticated ballad "Dreamsville," and Joe Henderson's "The Kicker" approached as a dynamite samba-jazz number by Zé Eduardo Nazario's fiery arrangement featuring the drummer himself, Cardoso on tenor sax and Grajew on Rhodes. Great sonic quality and amazing artwork too.

Internationally renowned jazz guitarist John Stein was born and raised in Kansas City, Missouri USA where he took up his instrument at an early age. His talent for and love of music ultimately earned him a faculty position at Berklee College of Music in Boston, where he is a Professor in the Harmony Department.

John Stein is an experienced teacher, clinician, recording artist, and author. John has performed as a leader or a sideman with some of the world’s finest jazz acts, and his compositions and performances cover the spectrum of jazz styles. John is a prolific recording artist as a leader, in addition to the contributions he has made to other artists’ projects.

“My music is the result of a lifetime’s involvement with my instrument, the guitar, and many hours studying theory, composition, arranging, and musical history,” says John. His warm and deeply expressive creative jazz performances move and excite audiences wherever he appears.
Posted by Arnaldo DeSouteiro at 11:42 PM