Blu-Spec Jazz CD of the Month - "Freddie Hubbard: Keep Your Soul Together" 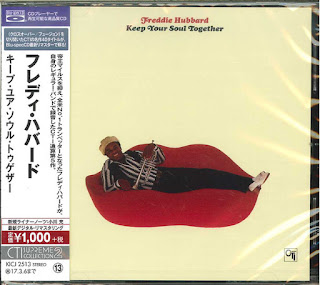 Our Blu-Spec CD of the month is "Keep Your Soul Together" with Freddie at the peak of his 70's powers; his fifth & last "official" CTI album, recorded in October 1973 after the ground-breaking "Red Clay," the wild "Straight Life," the Grammy-winning "First Light" and the sublime "Sky Dive."

The record follows strongly in the mood that Freddie set under Creed Taylor's guidance, but with some differences: no strings, no brass section, and, last but not least, Hubbard was finally allowed to use his touring band, which consisted of George Cables (Fender Rhodes), Kent Brinkley (bass), the late Ralph Penland (drums), Juno Lewis (percussion), Aurell Ray (electric guitar) and Junior Cook (tenor sax) on four long, drawn out tracks done with lots of electricity in the rhythms, and a very cosmic approach to the solos, with Ron Carter overdubbing on a couple of tunes.

The groove is funky, yet easy, featuring playing that's very open and very soulful. Titles include "Keep Your Soul Together", the hard-bop gem "Spirits Of Trane", "Destiny's Children", and the haunting ballad "Brigitte," dedicated to Freddie's wife and later re-recorded on "The Love Connection" album with a lush Claus Ogerman score.
Posted by Arnaldo DeSouteiro at 10:37 PM