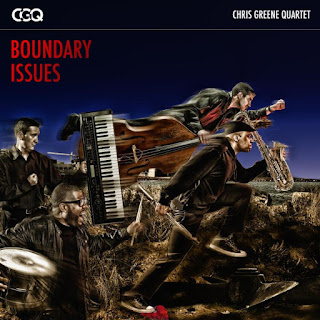 Saxophonist Chris Greene, a fixture on the Chicago scene dedicated to transcending the stylistic and structural borders of jazz, continues to discover new musical territory on his new CD "Boundary Issues." Set for April 14 release on Single Malt Recordings, the album is Greene's eighth with the long-standing quartet he formed in 2005 featuring pianist Damian Espinosa, bassist Marc Piane, and, since 2011, drummer Steve Corley.

Joining the core quartet as guests on several tracks are saxophonist Marqueal Jordan, known for his work with smooth jazz star Brian Culbertson; percussionist JoVia Armstrong, who's played with Nicole Mitchell's Black Earth Ensemble and JC Brooks & The Uptown Sound; guitarist Isaiah Sharkey, a member of D'Angelo's band; and vocalist Julio Davis (aka DJ WLS). Greene's eclectic song selection, inventive arrangements, and choice of guests not normally associated with jazz perfectly coalesce to present a portrait of an artist unafraid to take the road less traveled, push the envelope, and explore the frontiers of jazz.

In addition to three originals, Boundary Issues includes creative covers of works by Horace Silver ("Nica's Dream"), Kenny Kirkland ("Dienda"), Yellowjackets ("Summer Song"), and Billy Strayhorn ("Day Dream"). As his previous treatments of songs by artists as diverse as Madonna, Coltrane, Sting, Mingus, and lounge music king Martin Denny attest, Greene's naming his latest album Boundary Issues could be viewed as a tongue-in-cheek self-diagnosis. "I have a hard time staying in place," he confides. "I don't know my place, I guess, which is why I'm always stepping outside so-called boundaries. With the music I like, I just can't help thinking, what would it sound like if I did this, or this?" A case in point is his spacious reggae version of Horace Silver's "Nica's Dream." "I thought the biggest tribute to him would be to do something different," says Greene. "The idea to cover that classic as a reggae tune came to me while I was listening to music in the shower. It was like, why not?" 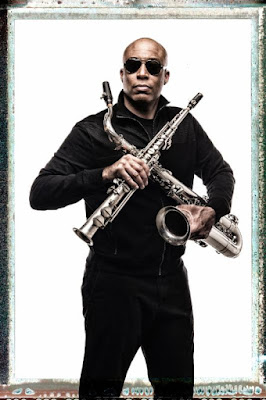 Born in 1973 in Evanston, Illinois, Chris Greene was exposed to a lot of music at home but only a smattering of jazz. His mother blasted Motown at her monthly card parties while his father played a lot of funk, soul, and disco; he absorbed all manner of pop styles watching MTV. Taking up the sax at age 10, he began studying it seriously when he was 16, "playing the hell out of a blues pentatonic scale," he recalls. He mainly played alto in the well-regarded Evanston High School Wind & Jazz Ensemble, as well as with local bands including a rock unit called Truth. "They were into Sting and I was eager to be their Branford [Marsalis]," he says. He would eventually play acid jazz with bands like Liquid Soul and Ted Sirota's Heavyweight Dub Band.

Greene studied at Indiana University with the late David Baker and the current jazz studies department chair Thomas Walsh. "It was a great experience for me," he says. "I was a kid with a lot of natural talent, but with a lack of discipline. I learned how to practice, how to break things down, how to solve problems."

Upon his return to Chicago, he continued his education by reaching out to established artists including Steve Coleman. "He was hard-headed in his determination to play music his way," he says. "It was a huge eye-opener for me how he put things together." Greene also got a major boost from Coleman's legendary mentor, Chicago tenor legend Von Freeman, at one of his famous jam sessions: "He didn't know me from Adam, but he was very encouraging. He said, 'Hey, I hear what you're trying to do. Keep at it.' That meant so much."

In 2005, Greene formed his current quartet. Whether the group is hugging tradition or engaging in experimentation, it radiates a deep sense of well-being. With each release, Greene has moved steadily from funk mildly seasoned with jazz to uncompromising jazz boasting subtle funk touches. As witness the title of the quartet's 2012 album, "A Group Effort," Greene prizes the band's ability to think and feel as one, to "leave fingerprints on each other's playing."