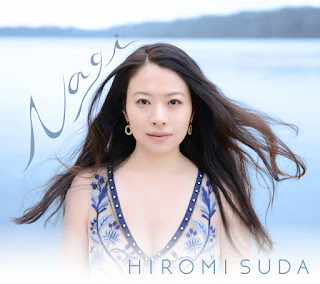 Singer-songwriter Hiromi Suda will be releasing her third album, "Nagi," on the Blujazz label, on March 7, 2017! She will be appearing in New York City at Subrosa on March 9 to celebrate the release. The radio add date is February 21.

"Nagi" is the latest and most fully realized iteration of Suda's singular hybrid conception, by which she mingles and juxtaposes the musical cultures of Japan and Brazil. The album was first released in Japan this past July on Inpartmaint Inc. to critical acclaim. As of March 7th, "Nagi" will be available worldwide on HDTracks and on iTunes.
​
"Suda's uniquely clear, unaffected voice glides, honoring the lines and emphases that characterize Brazilian jazz...There are subtle tilts in new kindred directions... as Japanese folk inflections are woven with contemporary swing edges."--Katie Bull, NYC Jazz Record
Posted by Arnaldo DeSouteiro at 6:47 PM