CD Reissue of the Month - "Lalo Schifrin: No One Home" 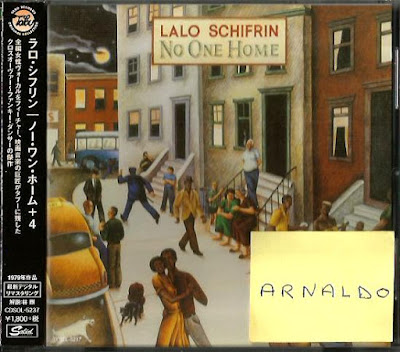 CD Reissue of the Month
Lalo Schifrin: "No One Home" (Tabu/Ultra-Vybe Inc.)

"No One Home" -- the follow-up to "Gypsies" -- was Lalo Schifrin's second and last album for the Tabu label. Released in 1979, it was a disco-oriented project spiced with funk grooves, jazzy harmonies and some beautiful pop melodies like Minnie Riperton's "Oh Darlin'...Life Goes On" (great synth and vocal riffs) and specially Lalo's own ballad "Memory of Love," graced with a short but very elegant acoustic piano solo.

But the album centerpiece is really the title track, on which guitarist Wah Wah Watson steals the show using the 'voice bag' over a funky Rhodes groovitation. This expanded Japanese CD reissue includes four bonus tracks: single and instrumental versions of "No One Home" plus two tunes -- "Moonlight Gypsies" and the mellow "Prophecy of Love" -- from the "Gypsies" album recorded in 1978 and already issued on CD some months ago in Europe.
Posted by Arnaldo DeSouteiro at 8:27 PM