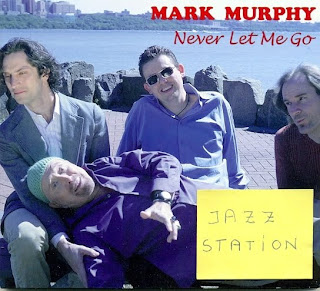 Recorded in a single day (January 8, 2010) "live" at Twiz Records Studios in River Edge, New Jersey, it's another superb singing lesson by the best male vocalist in the history of jazz. Murphy's adventurous spirit recreates Cole Porter's "I've Got You Under My Skin" (a highlight from his live performances since the 80s), "Turn Out The Stars" (yes, the Bill Evans tune with lyrics added by the late Gene Lees), the John Frigo-Lou Carter-Herb Ellis gem "Detour Ahead" (the best version since Milt Jackson's 1973 recording for his "Goodbye" album) and the Ray Evans-Jay Livingston title track (covered by another great vibes player, Bobby Hutcherson, for his 1986 "Color Schemes" date) in a creative way that no other singer or instrumentalist in the contemporary jazz scene could surpass.

Besides the liner notes by jazz historian Joe Lang, the booklet of this digipak issue also includes texts by executive producer Nita Loebis, by all members of the outstanding Mishia Piatigorsky Trio -- with the leader on acoustic piano, Danton Boller on acoustic bass & Chris Wabich on drums --, and by Mark Murphy himself. According to them, all 11 tracks were first-takes, with no vocal overdubs, like Murphy always liked to do. Other highlights: Murphy's own haunting ballad "I Know You From Somewhere," Curtis Lewis' ultra-hip "The Great City," Ivan Lins' "Evolution" (from his "Love Dance" album) and two Antonio Carlos Jobim's classics with English lyrics by Ray Gilbert: "Useless Landscape" (Inútil Paisagem) and "Photograph" (Fotografia). Mark Murphy, gifted with an obsession to take chances all the time, phrasing in a highly challenging way, knows not only how to caress the songs, but also the listener's souls. Essential, stunning and sublime. One of the best albums of the year.
Posted by Arnaldo DeSouteiro at 11:17 AM