Spin Cycle to Release Debut CD on May 6 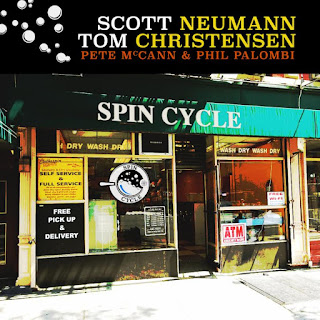 With its strong melodies, tight rhythms, intriguing textures, and sophisticated interplay, Spin Cycle has got everything covered. What makes the band special is how everything fits together -- or, by intention, doesn't. For listeners and band members alike, every tune is an adventure.


Spin Cycle is the new quartet co-led by drummer Scott Neumann and tenor saxophonist Tom Christensen -- and also featuring fellow veterans of the New York jazz scene Pete McCann on guitar and bassist Phil Palombi -- whose self-titled debut CD will be released by the leaders' Sound Footing Records on May 6.

Spin Cycle boasts six compositions by Christensen, a consummate multi-instrumentalist who mostly plays tenor saxophone here, and four by Neumann. Having performed in all kinds of settings including the Vanguard Jazz Orchestra, the Jazz Mandolin Project, the Gil Evans Project, Madeleine Peyroux's touring group, Broadway pit bands -- and Cheap Trick -- the co-leaders know how to dig deep, swing hard, and put a shine on a ballad.

After finishing a CD of his own in 2013 with Michael Blake and Mark Helias [the Neu3 Trio's Blessed], Neumann "got the thought of collaborating on an ongoing basis with musicians I liked and respected -- with friends who would get along sharing business responsibilities as well as creative ones.

Once they decided on the format of the band, getting McCann on board was the next step. Neumann has played with the Wisconsin native for more than 30 years, going back to their days at North Texas State (now the University of North Texas). And Christensen had played with the guitarist in Maria Schneider's big band. Palombi, a gifted bassist with whom Neumann had played in trumpeter Bill Mobley's big band during their four-year run at Smoke, was the final inspired piece to fall into place.

The title track, written for this session by Christensen, shows off a deeper and more complex side of the band via its intricate and varied cycle of chord changes. Neumann's "Crystalline," which features McCann on nylon-string guitar, is distinguished by its lingering over-the-top melody. And then there's the punk rock-like composition, "Smart Aleck," with its bellicose guitar opening and other aggressive effects. "This lineup gives us a lot of room to try out different things," says the drummer.

Born in 1962 in Bartlesville, Oklahoma, Scott Neumann started on the drums as a youngster and was exposed to what we now call classic rock by his older brother. Scott eventually found his way to the jazz-rock fusion of bands including Weather Report and Return to Forever.
Neumann went on to blossom in the esteemed music program at North Texas State and moved to New York in 1988. He's been a busy player on the New York scene ever since, playing with such luminaries as Kenny Barron and Ben Allison and accruing impressive credits as a vocal accompanist (for Ann Hampton Callaway, among others), Broadway musician (he made Swing!swing), and instructor (he directs the drum studies program at Lehigh University).

Tom Christensen was born in 1961 in Ventura, California. Like Neumann, he was drawn to rock early on; he became interested in jazz-rock fusion and straight-ahead jazz while attending high school in the Napa Valley. Frequenting clubs in nearby San Francisco, he heard such legends as Sonny Stitt, Dexter Gordon, and Art Blakey and had the opportunity to take private lessons from tenor saxophone great Joe Henderson.

Christensen attended the Eastman School of Music in Rochester, New York, studying classical music as well as jazz on both undergraduate and graduate levels. Since moving to the New York City area in 1989, he has established himself as a go-to player in jazz and commercial settings. For eight years, he was a member of the Toshiko Akiyoshi Jazz Orchestra, appearing on five of their albums. He also has played on recordings by Joe Lovano, Don Sebesky, and the David Liebman Big Band. Christensen, who is on the faculty of the Fieldston School in New York, first recorded as a leader in 2000 (Gualala).

Spin Cycle will be performing a CD release show at Smalls in New York on Friday 5/6, as well as a mini-tour taking them to the Jazz Room in Waterloo, Ontario, 6/25; the Rex in Toronto. 6/26; and the Rochester (NY) Jazz Festival, 6/27.

"After playing with Scott for many years around New York," says Christensen, "I'm really excited about our new band Spin Cycle. We are both committed to the band and its musical vision. This is the first in what will be a long line of great recordings."
Listen: soundcloud.com/spin-cycle-3