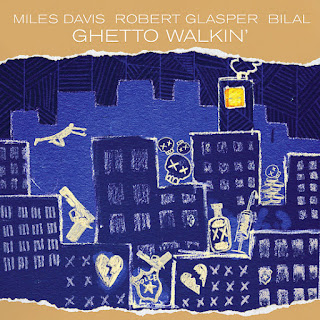 Yesterday, we got a copy of this amazing single that will be officially release during the celebrations for the Record Store Day 2016, on April 16. On this limited edition 12", keyboardist/producer Robert Glasper and singer/songwriter Bilal re-interpret the Miles Davis tune"The Ghetto Walk" from the "In A Silent Way" sessions.

This new track "Ghetto Walkin" will be on the upcoming release "Everything's Beautiful" (details in the post below.)

On its turn, the Side B of this single was originally available on the 3-CD box set "The Complete In A Silent Way Sessions" as a 26-minute long track, recorded in February 1969 in NYC with Joe Chambers, Wayne Shorter, John McLaughlin, Chick Corea and Herbie Hancock.

The upcoming "Everything's Beautiful" project taps some of jazz and r&b’s greats (Stevie Wonder, Erykah Badu and KING just to name a few) to reimagine the work of one of jazz’s most celebrated figures and remind the world of just how seismic his impact on the American Music canon was, is and always will be.

Today, Jazz Station proudly brings you a streaming from star-studded project; a spirited and empowering rework of Davis late-60s composition, “The Ghetto Walk,” featuring the incomparable vocal talents of Bilal. And truth be told, the pair of longtime collaborators (and friends, above all) deliver a stunning update, fit for jazz or hip-hop heads who prefer their notes with a touch of soul.

You can get a taste by streaming the track down below, just be sure to hold tight for the next installment and pre-order your copy of "Everything’s Beautiful" on iTunes today ahead of its official May 27th release.

Physical CDs of both releases can be pre-ordered on Dusty Groove:

Now in its ninth year, Record Store Day is an annual day-long celebration of record store culture held on the third Saturday in April. RSD has named Metallica as Record Store Day Ambassadors 2016.
Posted by Arnaldo DeSouteiro at 8:39 PM