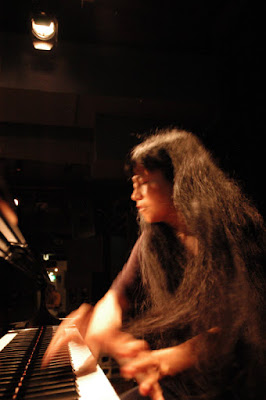 Satoko Fujii Returns to US for five concerts
May 17 - 23 in NY, Berkeley and LA
Concerts part of 20th anniversary celebration for Fujii's Libra Records label

Internationally acclaimed pianist/composer Satoko Fujii -- "one of the most original voices in free jazz" (Boston Globe) -- continues her yearlong celebration of the 20th anniversary of her Libra Records label with five concerts in the US from May 17 to 23. She will perform with her Orchestra New York in Brooklyn, and in NYC, Berkeley, and LA with groups especially assembled as part of the anniversary celebration.

Libra was launched in 1996 with Something About Water a duo recording with Fujii's mentor Paul Bley with whom she studied at New England Conservatory. In the years since then, Fujii and trumpeter Natsuki Tamura have released 41 albums on the label, featuring some of the most innovative and iconoclastic free jazz of the past two decades. They have recorded as a duet, with their numerous working small bands, as well as orchestras on three continents. It is an achievement few composer-improvisers have ever equalled.

In addition to maintaining her regular performance and recording schedule, Fujii is marking the label's anniversary with three types of special concerts. In October 2015, she began a series of monthly completely improvised piano solo concerts that have taken place globally in Tokyo and Mito, Japan; Berlin, Germany; Lille, France; and Sydney, Australia. With a special concert in Tokyo with trumpeter Kappa Maki and extraordinary Japanese percussionist Yoichi Okabe, she launched 20/20, a series of 20 concerts in 20 cities worldwide, each featuring the duo plus a special guest musician.

Saturday, May 21 at 3 p.m. - Satoko Fujii: A Tribute to Paul Bley - Maybeck Studio, 1537 Euclid Ave, Berkeley, CA
In this completely improvised solo recital, pianist/composer Satoko Fujii pays tribute to her mentor Paul Bley. "I was able to find my musical voice because of Paul Bley. He always encouraged me to express my music, and to sound like myself, not like others. It was a real 'revolution' in my life.
General admission: $20.
This concert is the 8th in a series of completely improvised solo piano concerts performed monthly by Fujii to celebrate the 20th anniversary of her Libra Records label. http://www.maybeckstudio.org/2016/03/satoko-fujii-improvised-piano-solo.html

Critics and fans alike hail pianist and composer SATOKO FUJII as one of the most original voices in jazz today.  She's "a virtuoso piano improviser, an original composer and a band-leader who gets the best collaborators to deliver," says John Fordham in The Guardian.  In concert and on approximately 80 albums as a leader or co-leader, the Japanese native (now based in Berlin) synthesizes jazz, contemporary classical, avant-rock and Japanese folk music into an innovative music instantly recognizable as hers alone.

Since she burst onto the scene in 1996 after earning her graduate diploma from New England Conservatory, Fujii has led some of the most consistently creative ensembles in modern improvised music. In 2013, she debuted a new ensemble, the Satoko Fujii New Trio featuring bassist Todd Nicholson and drummer Takashi Itani, the first piano trio she has led since her trio with Mark Dresser and Jim Black last played together in 2008. With addition of her husband trumpeter Natsuki Tamura in 2014 the core trio expanded into a new quartet called Tobira. The all-acoustic Satoko Fujii ma-do quartet, together from 2007 to 2012, showcased the latest developments in her composition for small ensembles in an intimate acoustic setting. Another acoustic quartet, the Min-Yoh Ensemble with trumpeter Tamura, trombonist Curtis Hasselbring, and accordionist Andrea Parkins is dedicated to developing written and improvised music in the collective spirit of Japanese folkloric music. Fujii also led an electrifying avant-rock quartet featuring drummer Tatsuya Yoshida of The Ruins from 2001 to 2007.

Fujii has also established herself as one of the world's leading composers for large jazz ensembles. Since 1996, she has released a steady stream of acclaimed releases for jazz orchestras and in 2006 she simultaneously released four big band albums: one from her New York ensemble, and one each by three different Japanese bands.  In 2013 she debuted the Satoko Fujii Orchestra Chicago at the Chicago Jazz Festival. In 2015, she released a CD by her new Satoko Fujii Orchestra Berlin and worked with orchestras in the Oakland, Calif., and Beilefeld, Germany.

In addition to playing accordion in Tamura's Gato Libre quartet, she also performs in a duo with Tamura, as an unaccompanied soloist, with the international quartet Kaze, and in ad hoc groupings with musicians working in different genres. Her special projects have included collaborations with ROVA saxophone quartet, violinist Carla Kihlstedt, pianist Myra Melford, bassist Joe Fonda, and Junk Box, a collaborative trio with Tamura and percussionist John Hollenbeck.

"Whether performing with her orchestra, combo, or playing solo piano, Satoko Fujii points the listener towards the future of music itself rather than simply providing entertainment," writes Junichi Konuma in Asahi Graph. She tours regularly appearing at festivals and clubs in the U.S., Canada, Japan, and Europe. Her ultimate goal: "I would love to make music that no one has heard before."