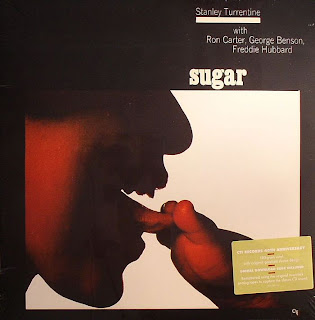 In his liner notes for the original 1971 LP release of "Sugar" (unexplainably & unfortunately deleted from this new vinyl reissue), my dear friend and top jazz historian Ira Gitler wrote: "Both organist Butch Cornell and drummer Billy Kaye are members of Turrentine's present combo. Cornell, Chattanooga born, was found by Stanley in Harrisburg, Pa. He was formerly with Willis Jackson. The particular clarity with which he articulates his lines is refreshing."

The vinyl issue includes three tracks: Turrentine's "Sugar" and Cornell's "Sunshine Alley" on Side A, and an extended cersion of John Coltrane's "Impressions" on Side B.

The cover art (by album designer Elton Robinson) features a controversial shot by photographer genius Pete Turner. "Back in the 1960s I had done a series for Look magazine called 'Black Is Beautiful.' The image on the cover of Sugar is an outtake from that shoot, of a mother licking a baby’s foot. Some people think it’s a sexual thing, but it’s not" Turner told to Marc Myers' excellent "JazzWax" blog last year.
http://www.jazzwax.com/2008/04/pete-turner-c-1.html
(btw, that pic is included on Pete Turner's latest book, the superb "The Color of Jazz")

"If ever there were a record that both fit perfectly and stood outside the CTI Records' stable sound, it is 'Sugar' by Stanley Turrentine. Butch Cornell's 'Sunshine Alley' is a solid, funky groover, paced by organ and double fours by Kaye. Turrentine and Hubbard stride into the melody and keep the vamp in the pocket, riding out past the blues line into a tag that just revs the thing up even further," jazz connoisseur Thom Jurek wrote in his review for the All Music Guide.

"Sugar" was both a critical and commercial sucess, peaking the Billboard charts as #3 Jazz Album, #29 Black and #182 Pop Album! And, needless to say, the original 1970 version of the title track became a CTI anthem, being included in dozens of compilations released all over the world. For additional details, please visit the definitive CTI website created by Douglas Payne: http://www.dougpayne.com/cti.htm 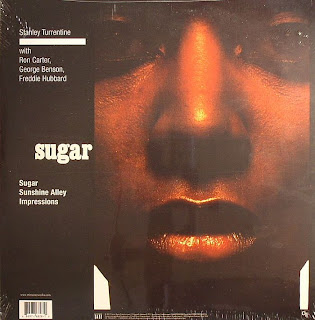 Posted by Arnaldo DeSouteiro at 5:03 AM