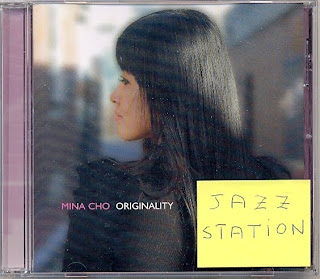 Rating: *****
Rarely an album received such an appropriate title. The Boston-based Korean artist Mina Cho is one of the best and most creative jazz pianists and composers to emerge in this millenium. In spite of strong influences - from Chick Corea to Eliane Elias -, she is her own woman, displaying an astonishing musicality, a natural amalgamation of elements from jazz, Venezuelan and Brazilian music, and an outstanding balance between intellect and emotion on her debut solo album. No overplaying. No standards. She wrote all the original material, and even the lyrics to the bonus track, "Because You Are Looking At Me," sung by David Thorne Scott. The piano/acoustic guitar duo on "Choro No.2" brings reminiscences of the milestone collaboration between Cesar Mariano & Helio Delmiro on the "Samambaia" album. But my personal favorite tracks are "A White Lion," "Corea" and specially the highly energized "I Like A Turtle," with those magical left-hand lines a la Elias. One of the top CDs of the year. And my vote for "best new artist."

Pianist Mina Cho was on track for a dazzling classical career when she first encountered gospel music as a university student in her native Seoul. She sought private study of her new passion, which led her to jazz, a scholarship at Berklee College of Music, and the recording of her first CD. The aptly-titled "Originality" reflects Cho's distinctive pan-American perspective and singular voice as pianist and composer.

"Mina's compositions and piano playing and soloing incorporate a level of sophistication, grace, and raw power while being totally unique," says Leo Blanco, the acclaimed Venezuelan pianist/composer who was an important mentor for Cho at Berklee. "She has the heart of a true improviser and contemporary jazz musician, but has also mastered music from other styles, such as South American and Afro-Caribbean. This gives her a totally unique status in the contemporary music scene."

Mina's striking compositions incorporate "various cultural elements and my diverse experiences in music, which is shaped and colored by my own musical interpretation and vocabulary and personality," says Cho. "One can hear rhythms and harmonic elements of Venezuelan music, Brazilian choro, gospel jazz, and swing, but somehow all of those influences are connected through my musical vision."

Mina, 28, came to Berklee on a scholarship in January 2006 and covered her living expenses with a series of piano and organ gigs at African-American churches in the Boston area. (She currently plays at the Somerville Community Baptist Church and the Ebenezer Assembly of God.)

While continuing to develop her gospel chops outside of school, she had the opportunity to study at Berklee with Leo Blanco, who introduced her to Venezuelan styles like lando and merengue. Cho also explored tango and Afro-Cuban forms, and -- thanks to Brazilian pianist Cesar Camargo Mariano, whose compositions and concepts have been an inspiration -- Brazilian music, particularly choro.

"I feel so grateful to have the chance to share my story with other people through my music, particularly through my new album," says Cho. "Each tune in this album reminds me of the very special moments I have had while living in the United States: The thrilling moment when I first saw Leo Blanco playing his compositions with all his passion and love for music; the moment I played my music completely connected with my musician colleagues; the moment I lost someone who had been taking care of me with love since I lived in Boston; the passion, friendship, joy, and sorrow in my life. Now I have finished writing a chapter of my music, and I am ready to start my journey for the next one."
Posted by Arnaldo DeSouteiro at 5:02 AM