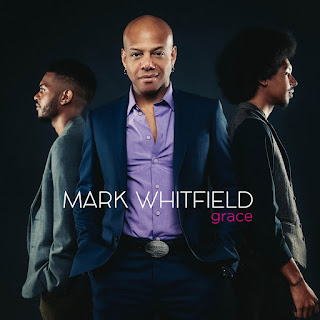 Esteemed guitarist and composer Mark Whitfield has just released "Grace", his 15th album as a leader. Whitfield's first project as a leader in seven years, "Grace" is a celebration of love and legacy, family and future, as the elder Whitfield ushers in a new era of musical excellence in the form of his descendants: pianist Davis and drummer Mark Jr.

Like father, like sons. Whitfield burst on the jazz scene with his critically acclaimed 1990 debut "The Marksman" for Warner Bros. Heralded then as "The Best Young Guitarist In the Business" by the New York Times, Whitfield stayed true to the sentiment with a fruitful career spanning over two decades and including tenures with a litany of jazz and pop music greats.

Following in the footsteps of their father, and their uncle (the great jazz drummer Troy Davis), Mark Jr. and Davis have established themselves as "ones to watch" on their respective instruments. Both "grew up on the bandstand" alongside their father and both picked up their instruments at a young age. "I was attached to him by the hip! Anytime I could be there, I'd be there. You know, in all those clubs where I wasn't supposed to be as a five-year-old -- I was there," recalled Mark Jr in an interview with Revive Music in 2013.

After sharing the stage on so many occasions, Mark brought his children into the studio along with "honorary Whitfield family member" bassist Yasushi Nakamura and guest vocalist Sy Smith to record "Grace". "I wanted to share my love of music with sons, and use this love to forge a bond between the three of us that would enrich our lives, enlighten our consciousness and support us through the toughest of times," says Mark. The result is "Grace", a collection of nine personal compositions; each telling a unique story that chronicles the last two decades as a family.

"Grace" kicks off with the biographical "Afro Samurai", inspired by Mark's triage of young curiosities: music, skateboarding and "terrorizing all who dared to come near my garage with my less than stellar kung fu skills!" These three disciplines are represented by the three distinct solo sections.

"Blue D.A". which first appeared on Whitfield's 1994 album "True Blue", is reimagined here as a tribute to the late, great Kenny Kirkland, who can be heard on the original. The title track presents the first "extended family" collaboration with a special appearance by cousin Sy Smith. "I wrote a song as a reaction to the violence that has plagued our society for years and seems to have worsened severely in recent months and we turned to our cousin... composer, lyricist and songbird extraordinaire, Sy Smith, to bring it to life," said Whitfield.

"Double Trouble" serves as an homage to Mark's mentor George Benson, who encouraged him to join the Jack McDuff Quartet and is inspired by a tour situation gone wrong.

Whitfield and co. slow things down for "Space Between Us", a tender ballad where Whitfield's playing resonates with every stroke, but picks us back up for "Fortress", another call to Benson and a nod to contemporary Kevin Eubanks. "The 1st guitar record I ever owned was George Benson's Breezin'. I wore the old vinyl LP down to the grooves learning every single note that the aforementioned Benson played," said Mark, adding, "...then I made the boys listen to over & over so they could clearly understand the genius of the man they refer to as "Uncle George"!

The final third of "Grace" includes "Undiscovered", a testament to self discovery. Says Mark, "As teacher, bandleader & composer I endeavor to create musical situations that promote the right environment for the group to discover new pathways to reach higher levels of self expression. If nothing else, Davis' piano solo is the embodiment of that which I hoped to create!"

The penultimate tune "The Socrates Curse" brews a perfect storm between Davis' transformative solo and Mark Jr's volcanic rhythmic explosion. 'Grace' reaches its conclusion with "Pulse Pt2", an easy groove off into the sunset. 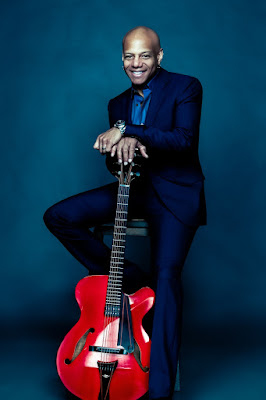 In 1990 the New York Times dubbed Whitfield "The Best Young Guitarist in the Business". Later that year, Warner Bros. released his debut album "The Marksman". The success of his debut release led to a recording career that has produced a total of 14 solo recordings and a myriad of collaborative efforts with some of the most important artists in recent years; Sting, Steven Tyler, D'Angelo, Mary J. Blige, John Mayer, Chaka Khan, Jill Scott, Diana Krall, Christian McBride, Chris Botti, Roy Hargrove and Nicholas Payton.

ABOUT THE WHITFIELD FAMILY BAND:
Along the way the "Whitfield Family Band" was born, literally. In 1994 The Mark Whitfield Quartet appeared on the Thanksgiving Day broadcast of Good Morning America. This performance featured a very special guest drummer, 4 year old Mark Whitfield Jr. It was obvious even then that he was destined for greatness. Following in his father's footsteps he attended the Berklee College of Music and graduated in 2011 with honors. He went on to study for his Masters Degree at the Manhattan School of Music while simultaneously embarking on a career as a drummer extraordinaire. He has quickly earned a reputation as one of the best young drummers in Jazz and was nominated for a Grammy in 2014 as part of the ensemble featured on Kenny Garrett's 2013 release "Pushing the World Away". Not to be outdone by his older brother, Davis Whitfield, a prodigious pianist, earned a Presidential Scholarship and graduated from the Berklee College of Music with honors in 2014.
Posted by Arnaldo DeSouteiro at 9:49 PM