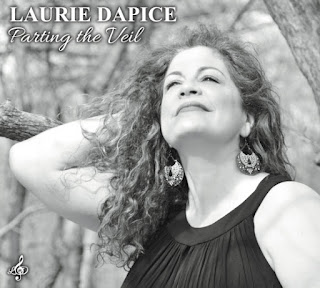 Laurie Dapice had a dream as a young girl & knew she wanted to be a singer at the age of 14. She began vocal training with Internationally renowned Tenor Pasquale Caputo, who happened to live in her hometown of Utica New York. Laurie relocated to New York City in 1998 to follow her dreams to be a singer. She may have left everything behind, but little did she know what lie ahead.

She began her journey & education at Mannes College of Music & The New School University of Jazz & Contemporary Music receiving a Bachelors of Fine Arts Degree in Performance & Music in 2006 & during her senior year, performed in her own weekly show Jazz Fever in Harlem & opened for Jazz Giant & Trombonist Benny Powell. In 2008 some of the seeds Laurie had planted were bearing fruit. She was chosen as one of New York City’s top 12 Jazz Singers to compete in the annual Jazz Mobile competition, founded by Legendary Jazz Pianist-Musician Dr Billy Taylor & made it to the top final four. One month later she found herself headed to Japan & was asked to perform as a headlining act six nights a week for performances at The Zenith Sky Lounge in The Marriott Hotels 56th floor Penthouse.

When Laurie returned to Manhattan, she accomplished a life long dream, recording & completing her first Album which was recorded at Bennett Studios in Englewood NJ, which took just under 1 year to record. “Parting the Veil” is the title of Laurie’s first highly anticipated album.

She has performed in the most well known Jazz Venues in New York City including The Dream Hotel –The Night Hotel- The Savoy- The Lexington Lounge- The Alhambra Ballroom, Sweet Rhythm formerly known as Sweet Basil, The Apollo Theater, Minton’s Playhouse, The Kitano Hotel & The House of Jazz in Montreal Quebec formerly know as Biddle’s.

Laurie performed in July 2013 with Jazz Forum in the Ella Fitzgerald Celebration at The Hudson River Museum’s new outdoor amphitheater alongside the Hudson River in Yonker’s where Ella grew up. Laurie was quoted in this concert as being “One Great Night in Jazz” by critically acclaimed award winning artist Theodore Berkowitz.