CD Reissue of the Month - "Fuse One" 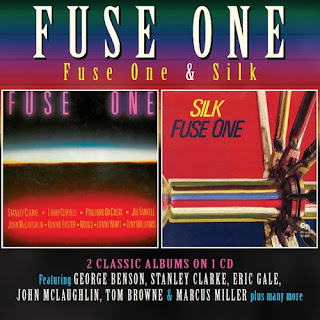 This twofer CD -- released by Robinsongs, a subsidiary of the UK label Cherry Red -- includes the complete two first albums recorded by the all-star group Fuse One (a project conceived by Creed Taylor, with Stanley Clarke as musical director). Plus two bonus tracks: the radio edit version of "Silk" and "Ode To A Kudu" (George Benson's song originally recorded on his CTI album "Beyond The Blue Horizon"), both previously released only on single. A third Fuse One LP, "Ice," was recorded in 1983 with arrangements by David Matthews, and so far released on CD only in Japan.

As producer, Creed Taylor wrote in the original vinyl liner notes: "Fuse One was conceived as a forum in which major contemporary musicians perform according to their own musical disciplines and interact without the constraints that accompany leader responsibilities. Each player brings in new compositions and ideas."

The first Fuse One album was released in 1980, and kicks off with a Ronnie Foster composition titled 'Grand Prix' where Stanley Clarke takes the lead, and creates a jazz-funk classic. Other stand out tracks are John McLaughlin's "To Whom It May Concern" (with Joe Farrell shining on flute, propelled by Tony William's drums) and "Taxi Blues" composed by Stanley Clarke and featuring McLaughlin's unmistakable style.

"Silk" was recorded one year later, in September 1981, at Rudy Van Gelder's Studio, and features 'In Celebration Of The Human Spirit' and the smooth funk 'Silk' which was the band's only single and the 7" version is included as a bonus track along with the George Benson composed b-side 'Ode To A Kudu'. 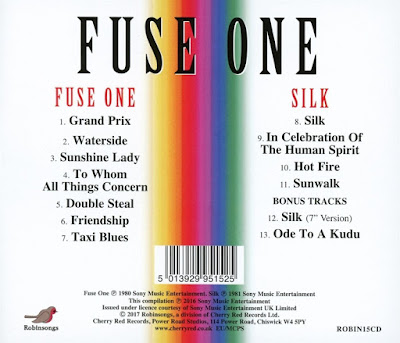 Posted by Arnaldo DeSouteiro at 9:06 PM