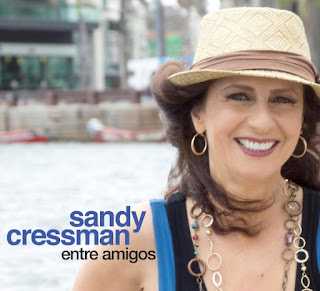 As founder and leader of the group Homenagem Brasileira, San Francisco-based vocalist/ educator Sandy Cressman has had many opportunities over the last 20-plus years to forge creative partnerships with like-minded musicians from the Bay to Brazil. Her entrancing new album, "Entre Amigos," which will be released on February 3 by her Cressman Music imprint, marks the culmination of these relationships and is a celebration of her own deep history with the music and the players.

Though the new CD is her first new recording since 2005's "Brasil--Sempre no Coração," a project devoted to definitive songs by masters of MPB (música popular brasileira), Cressman never stepped away from music. As an educator and linchpin of a bustling creative family including her husband, former longtime Santana trombonist and recording engineer Jeff Cressman; their older daughter, New York trombonist/vocalist Natalie Cressman; and their younger daughter, Los Angeles dancer Julianna Cressman, she's maintained enduring musical ties with some of the region's finest musicians. There's nothing quite like being massively overscheduled to concentrate one's attention, and Cressman came up with an enthralling set of answers to the self-searching question, "What do I really want to do with this music?"

"For a long while I concentrated on mining the treasures in the existing Brazilian music repertoire," says Cressman. "But at a certain point I started writing and asking people to collaborate, and Entre Amigos collects many of these amazing connections." 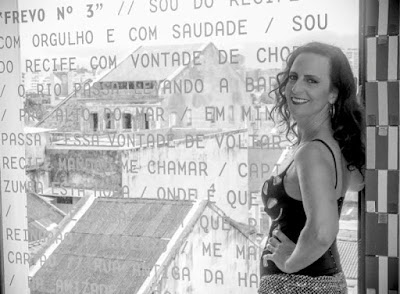 Among the collaborators on the new CD are rising Brazilian-American guitarist Ian Faquini ("Nossa História," "Deixa a Amor Florescer"), pianist/composer Jovino Santos Neto ("Para Hermeto"), Brazilian pianist Antonio Adolfo ("Eu Vou Lembrar"), and São Paulo-based samba-jazzistas Dani and Debora Gurgel ("Como Eu Quero Cantar"). Significantly, "Entre Amigos" opens a new chapter for Cressman as a tunesmith; she contributed lyrics, in both Portuguese and English, for every track on the album, and also wrote both music and lyrics for "Ela É," recorded in Germany with the 2010 Santana rhythm section, including Dennis Chambers, and for "Não Me Acorde Não," which tells the story of her and her husband's participation in Carnaval 2015 in Recife with renowned Pernambuco frevo composer/bandleader Spok and his Spok Frevo Big Band.

That performance, and her return to Recife to record with Spok earlier this year, led to an intriguing invitation. When the director of music at the Paço do Frevo (Frevo Museum) learned of her recording project, he proposed a cultural exchange with local frevo musicians: the Cressmans will do a concert and some master classes at the Paço do Frevo the week preceding Carnaval 2017, and then they will perform at Carnaval with the Spok Frevo Orquestra.

Sandy continues to work with Homenagem Brasileira, as well as Mistura Fina, a more recent Latin jazz combo led by guitarist Ray Obiedo (a longtime musical partner with whom she co-wrote Entre Amigos' "Eu Mais Você"). In recent months she's collaborated with the acclaimed 17-piece Electric Squeezebox Orchestra led by trumpeter Erik Jekabson, performed with world jazz pioneer Jai Uttal, and celebrated the music of Guinga with Faquini and flutist Rebecca Kleinmann. Somehow, every path seems to lead her back to Brazil.

"I'm thrilled that my musical horizons are widening," she says. "For many years I was very Rio-centric, focused on bossa nova, samba, and Brazilian jazz. This record has São Paulo samba jazz, Northeastern rhythms frevo and maracatu. I keep meeting these people who have different areas of expertise and knowledge, and it's so inspiring and invigorating to be involved in the creation of these songs."