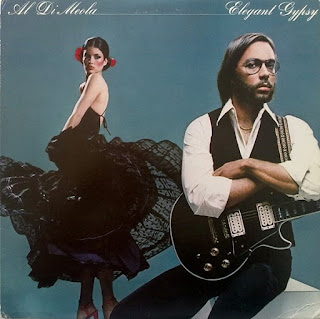 Released in 1977, "Elegant Gypsy" was the follow-up album to Di Meola's debut release.  The distinctive music on the album is a fusion of jazz and rock, with Di Meola's lightning-fast guitar riffs intermixed with lyrical acoustical passages.  The album was named Best Guitar Album in Guitar Player magazine and is generally regarded as a masterpiece in the rock-jazz fusion music genre.

A bona fide guitar hero and perennial poll-winner, Al Di Meola has been recognized internationally over the past four decades as a virtuoso of the highest order. A prolific composer and prodigious six-string talent, Di Meola has amassed over 20 albums as a leader while collaborating on a dozen or so others with the likes of Chick Corea, Stanley Clarke, Lenny White, John McLaughlin, Paco de Lucia, Jean-Luc Ponty and more.

And while his dazzling technique on both acoustic and electric guitars has afforded him regal status among hordes of frettboard aficionados who regularly flock to his concerts, the depth of Di Meola's writing and compositions along with the soulfulness of his guitar expressions have won him legions of fans worldwide.