Fusion CD of the Month - simakDialog: "The 6th Story" 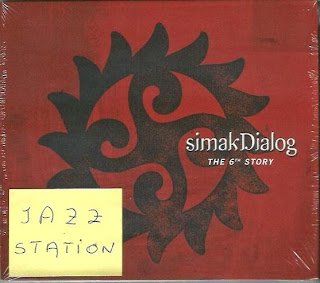 Fusion CD of the Month
simakDialog: "The 6th Story" (MoonJune)

"The Sixth Story" is the exhilarating, full-throttle follow-up to 2009's critically-acclaimed CD "Demi Masa," from the brilliant psychedelic/gamela-jazz/world music phenoms, simakDialog. Raising the benchmark in a genre known for its brilliant artists is no easy feat, but the young virtuosos are decidedly up to the task: each composition is an exquisite master-class rendering of equal parts elegance and intrigue. This is modern progressive jazz at its most original, most far-reaching and most achieving.

Referencing the discernible influence of a host of the genre's most innovative voices -- from the great Miles Davis, to Return To Forever, to The Zawinul Syndicate, John Abercrombie Quartet, Tribal Tech, and even the late, great Charles Mingus -- the band continues to push the musical envelope: leaping boldly into uncharted territories where progressive music has yet dared venture (and precious few would be brave- or skilled-enough to even consider attempting). Employing formulas that eclipse genre and culture (and any other conventional means of categorization!), Riza Arshad, Tohpati and company continue to surprise and astonish listeners ... even after twenty years of playing together!

The guiding work of keyboardist Riza Arshad (a true Fender Rhodes stylist) has never been bolder or more self-assured, with the maestro laying down line after line of flowing, sensitive, unpredictable-yet-wonderfully-articulate passages. Renowned guitar phenom Tohpati is equal to the task, compelled to produce some of his most emotional and ambitious fretwork to date. Framing a profound comprehension and command of the cuts' many intricate complexities, shifts and nuances, his world-class guitar stylings have never been sweeter; his tones, textures and phrases are consistently perfect for the occasion.

Propelling the steady, confident undercurrent, monster bassist Adhithya Pratama, and their three seasoned percussionists (Endang Ramdan, Erlan Suwardana, and newest member, Cucu Kurnia) provide a solid foundation beneath the dense, weaving foreground musings of Riza and Tohpati. Despite their propensity for waltzing wildly into the unknown, the band is always on sure footing through even the most challenging sonic terrain. This is as good as modern jazz gets.

Perhaps this could be, to a small extent, a case of "returning to one's roots:" this instrumental offering would seem to bear more resemblance, stylistically, to their third album, "Trance/Mission" (produced prior to their association with MoonJune Records) than their two previous MoonJune releases [the aforementioned "Demi Masa," and 2007's "Patahan"]. But, in all truth, this would not be doing this album justice: The Sixth Story goes well beyond anything previously offered by any of those albums, weaving its own, intriguing, spellbinding tale.

The greatest works of the genre have always exhibited a spirit of pioneering excellence. There is no exception here: this is a modern progressive jazz masterpiece -- an astounding work of uncompromising excellence.... and one, most certainly, not be missed! 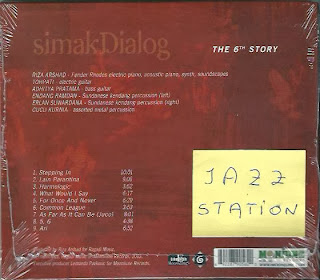 Posted by Arnaldo DeSouteiro at 4:08 PM