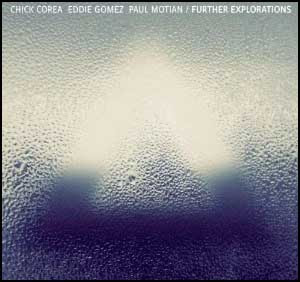 “Jazz music is an art form that retains its viable life by the simple act of exploration. The never-ending sense of knowing that something of interest lies beyond that corner, down that road you see off the highway, when you look up and see the moon glowing in the night sky or when you hold a child in your arms...Exploration is the lingua franca for these musicians, each an adventurer in his own right, yet bound by the excitement of this project to evolve quickly into a fully communicative jazz trio,” says associate producer Bob Belden.

The contributions of pianist, composer, arranger and bandleader Bill Evans to the language and appreciation of jazz continue to have a profound influence. Join master pianist Chick Corea as he leads original Evans alumni – bassist Eddie Gomez and the late drummer Paul Motian – on his new recording, “Further Explorations,” a two-CD live set of 19 tracks, on Concord Jazz.

Produced by Corea, “Further Explorations” was recorded May 4-17, 2010, at the Blue Note in New York City. (2011 marks the 50th anniversary of the release of Evans’ original “Explorations” LP with Motian and bassist Scott LaFaro on the Riverside label.) In preparation, Corea, Gomez and Motian examined the entire Bill Evans discography. Rather than approach the music as a tribute, his material provided more of a template. The results are inspired.

Disc one kicks off with “Peri’s Scope,” from Evans’ LP Portrait in Jazz, “Gloria’s Step,” a Scott LaFaro classic from Evans’ LP Sunday at the Village Vanguard, and Irving Berlin’s “They Say That Falling in Love Is Wonderful,” from the Broadway show Annie Get Your Gun.

As an added bonus, the first disc features an unrecorded piece by Evans called “Song No. 1.” The tune was discovered by archivist Frank Fuchs and from this information came a tape of the song from Evans’ son. “Chick transcribed the song, and confirmed with Eddie that this was something that Bill had been working on for years,” writes associate producer Bob Belden in the liner notes. “On the first few nights, the song was so new that it was to be played as close to the written page as possible. Over the course of two weeks, it transformed into the fully-developed performance you hear on this set, which will make this version the definitive interpretation.”

Disc two opens with “Hot House,” a Tadd Dameron composition from 1940s, followed by Paul Motian’s “Mode VI.” There’s something for nearly everyone here, from Evans' chestnuts like “Turn Out The Stars” and the jazz waltz “Very Early” to Corea’s own “Another Tango,” and Jimmy Van Heusen and Johnny Burke’s “But Beautiful.” The session wraps up with an Eddie Gomez tune, “Puccini’s Walk,” originally recorded in 1987 on Gomez's "Discovery" CD for Sony.

Chick Corea has been at the forefront of modern improvised music for nearly five decades. His connection to Bill Evans is that of a student: he adapted many of Evans’ harmonic concepts and pianistic techniques, and learned from a mutual understanding of classical music and the development of the piano trio as a singular jazz ensemble. Corea’s definitive trio recordings, Now He Sings, Now He Sobs and The Song of Singing, reflect this progression. “In my own musical journey,” he says, “Bill Evans’ tremendous contributions to the piano arts have continued to be an important touchstone for me.”

In the case of Eddie Gomez and Paul Motian, the connection is personal and emotionally deep, involving performing and recording with Evans during his most fertile and creative periods. “My eleven years with Bill Evans (1966-77) were profoundly important to me; valuable to me in so many ways,” Gomez says. “This experience contributed immeasurably to my musical values. When Chick called with the idea of celebrating Bill’s music I was intrigued with the concept, and thrilled that Paul (Motian) would be playing the drums.”

Sadly, Motian died on November 22, 2011. He was a member of the first Bill Evans Trio, with Scott LaFaro on bass. This was the most influential progressive piano trio in jazz at the time. “I loved playing with Chick and Eddie during our two-week stay at the Blue Note,” said Motian. “It was two weeks of great music, friendship and tribute. This CD is a true reflection of that.”

“Choosing this set of renditions from 24 ninety-minute sets wasn’t easy, as the whole of the two-week stint seemed like one growing and ever-changing thought,” Corea says. “But I’m very happy to share with you this glimpse.”

"Further Explorations" is a journey into the imagination of three musicians: Chick Corea, Eddie Gomez and Paul Motian. Although a shared love for the music of Bill Evans unites them, this album is less about reminiscence and more about "Further Explorations" of the piano trio sound. Join them on this adventure!
Posted by Arnaldo DeSouteiro at 6:02 AM