Masterpiece of the Month - "Arthur Verocai: No Voo do Urubu" 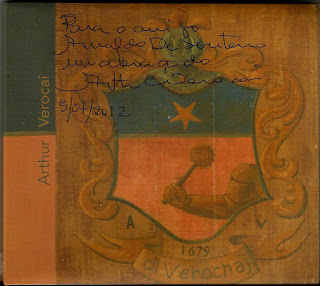 In Verocai's unique style, the orchestra is an integral part of his melodies, not used for sweetening. It never sounds like an overdub either, even when it's overdubbed! No other arranger in the world sounds like him.

The title track opens the album with such a strong feeling, in such a deep mood, that makes you wanna keep listening to it over and over again, all your life. The cinematic intro is followed by a funk groove played on the Rhodes that develops so naturally into a samba beat (with the melody sung by Seu Jorge, in the best performance of his life) that sticks to your soul.

As if his gifts as a composer and arranger were not enough to enlight us, there's also Verocai the singer (awe-inspiring on the haunting ballad "O Tempo E O Vento" with lyrics by the late poet Tiberio Gaspar that refer to the leader's life), Verocai the guitarist (soloing with extreme inventiveness on the electric guitar on "O Tambor"), and Verocai the lyricist (the up-tempo bolero "Oh! Juliana" sung by Danilo Caymmi, with the Maestro soloing with gusto on the acoustic guitar). Essential.
Posted by Arnaldo DeSouteiro at 10:08 PM