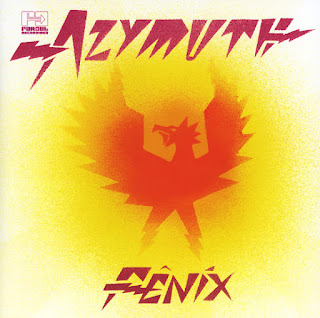 Brazil's most sucessful fusion group ever, Azymuth strikes again with "Fênix," dedicated -- as printed in the booklet -- "in loving memory to José Roberto Bertrami." It's their first new album after the death of keyboardist/founder Bertrami in 2012 at age 66. And they don't dissapoint their cult following.

Bertrami was Azymuth's soul. Period. But co-founders bassist Alex Malheiros and drummer Ivan Conti (aka Mamão) are first-rate soulmates, extraordinary artists who rank about the best musicians of the world.

When Bertrami left the group for some years in the latel 80s/early 90s, he was replaced by two great keyboardists (at first Jota Moraes, and later Marinho Boffa) who, despite their big talents, didn't fit with the group's aesthetics on their recordings with the trio. They did nice albums but that didn't sound like Azymuth.

Kiko Continentino, who does his official debut as Azymuth's new keyboardist, is another story. Although his own man (famous for collaborations with Milton Nascimento, Djavan and Gilberto Gil, among dozens of others Brazilian pop stars), on "Fênix" he plays very much in the style of Bertrami and, surprise! (or miracle) the group sounds once again like the Azymuth of their glorious days.

Continentino adds his own personality, but didn't try to change Azymuth's unmistakable sonority and happy "crazy samba" style. One of the main proofs is that one of the album highlights, "Orange Clouds," written by the new keyboardist in dedication to the original trio incarnation, evokes memories of Bertrami while, at the same times, injects new blood to the band. The perfect mix between respect and innovation, with Continentino playing his ass off on Rhodes, Hammond organ and synthesizers.

Other highlights: two takes of the radio-friendly tune "Villa Mariana" (written at six hands by Continentino, Malheiros and Conti, also heard on wordless vocals), the title track "Fênix" (co-written by Malheiros and his son-in-law Daniel Maunick, with Continentiono using the Vocoder that was one of Bertrami's trademarks), "Neptunians," "Papa Samba" and Malheiros' enchanting lyricism of "Rio Doce," the album equivalent to other Malheiros' typical subtle tunes like "Cascade of the Seven Waterfalls," "Somewhere In Brazil" and "The Textile Factory," three meditative bossa-oriented tunes from their Milestone years.

As usual on Azymuth sessions, the trio is augmented by such special guests as percussionist Robertinho Silva (replacing their most often percussion contributor, Sidinho Moreira) and additional keyboardist & producer Daniel Maunick (the very talented son of Incognito's boss Bluey), who also engineered the album in an impeccable way with Carlos Machado.

The "market" knows that Bertrami left a still unreleased last album with Azymuth, that still remains unreleased but can be out in a near future. The world needs to listen to it. But, for now, we can keep listening over and over again to "Fênix."
Posted by Arnaldo DeSouteiro at 10:36 PM