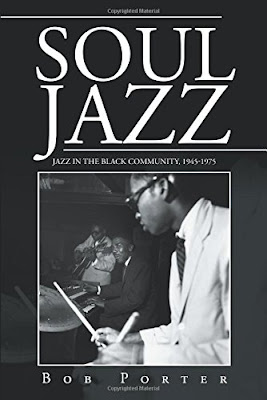 Record producer, jazz writer and broadcaster Bob Porter discusses his new book Soul Jazz: Jazz in the Black Community, 1945-1975, which complies a history of jazz in the back community in the period from the end of World War II until the end of the Vietnam War.

Soul Jazz is a history of jazz and its reception in the black community in the period from the end of World War II until the end of the Vietnam War. Previous histories reflect the perspective of an integrated America, yet the United States was a segregated country in 1945. The black audience had a very different take on the music and that is the perception explored in Soul Jazz.

Bob Porter is a record producer, writer and broadcaster in the fields of Jazz and Blues.  He has worked for such prominent record labels a Prestige, Savoy and Atlantic.  He has produced more than 175 albums and several hundred reissues.  He has contributed to DownBeat, JazzTimes, Jazz Journal (London) and currently writes a book review column for the Journal of the International Association of Jazz Record Collectors.  He is a two-time Grammy winner, was awarded the Marion McPartland Award for Excellence in Jazz Broadcasting and is a member of the Blues Foundation Hall of Fame.  He currently is the host of three separate radio programs on WBGO Newark.

Available In The Following Formats From Xlibris: E-Book, Softcover and Hardcover
http://bookstore.xlibris.com/Products/CategoryCenter/MUS!025/Jazz.aspx

Also Available From Amazon.com
Posted by Arnaldo DeSouteiro at 10:36 PM