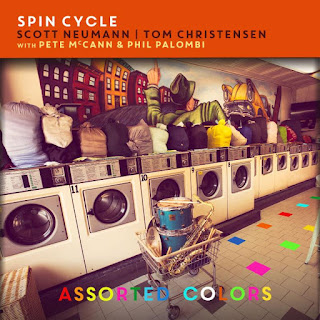 One of the freshest sounding bands to emerge on the jazz scene in this or any decade, Spin Cycle follows up its critically acclaimed eponymous debut from 2016 with the release on April 6 of "Assorted Colors" (Sound Footing Records). The new recording, coming after two years of intensive touring that further refined their distinctive take on jazz, sustains the praise bestowed by DownBeat's Ed Enright in his rave review of their first album that hailed the band as "a cohesive unit that commands an exceptional stylistic range and exhibits a go-for-broke attitude."

On their sophomore release, the piano-less quartet delivers more of the "bright melodic lines, deep-seated grooves, catchy rhythmic devices and sophisticated harmony" cited by Enright, who praised them for "improvisations run wild, as soloists embrace aggressive and daring ideas from the realms of modal jazz, free-jazz, second-line and soul, not to mention good old-fashioned swing."

Founded in 2014 and co-led by drummer Scott Neumann and saxophonist Tom Christensen, who have known and played with each other in various settings for well over 25 years, Spin Cycle is rounded out by guitarist Pete McCann and bassist Phil Palombi. The four musicians are mainstays of the New York jazz scene.

The title "Assorted Colors" alludes in part to the broad and eclectic stylistic palettes Christensen and Neumann each draw upon while crafting the compositions that define Spin Cycle's musical direction. (Christensen contributed six tunes to the session, Neumann five.) "One of our aims was to develop the songs not by adding sections but by building on the form itself via solos or concepts," Neumann says. "We wrote things that got to the heart of the matter, but also were vehicles that allowed us to stretch," Christensen adds. 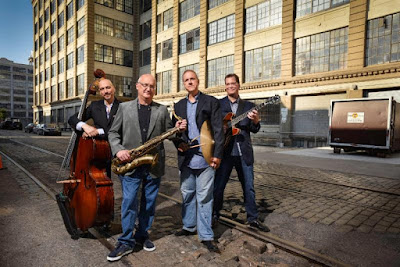 Spin Cycle's decision to use a guitar rather than a piano in the band enables the creation of unusual blends of airy textures that are a trademark of the band's tonal tapestries. "Guitar chords are more sparse than piano chords, they're more open sounding," says Christensen.

Among the Christensen tunes on "Assorted Colors" are the arresting minor-key "Possum Dark," in his words a "swaggering bad ass blues" named after the enforcer in the post-apocalyptic novella Ginny Sweethips' Flying Circus, and the stripped-down, minimalism-streaked "Two Pan Man," on which he lets it rip on tenor while guitarist McCann, according to the composer, "sounds almost like a second wind player."

Neumann's compositions include the sharp-angled, Monk-inspired "Break Tune," whose infectious swing and sense of fun provide a spirited introduction to the album. Neumann, who spent a week in Cuba in 2017 studying with Cuban drummers, also composed "To the Puente," an intriguing blend of the son montuno and modern mambo accents à la Chick Corea. "Affirmation" has a cool, rolling vibe recalling some of Pat Metheny's classic recordings.

Tom Christensen studied classical music and jazz at both undergraduate and graduate levels at the Eastman School of Music in Rochester, NY, and moved to New York in 1989. For eight years, he was a member of the Toshiko Akiyoshi Jazz Orchestra, appearing on five of their albums. He also has played on such notable recordings as Joe Lovano's "Celebrating Sinatra," Rufus Reid's "Quiet Pride," and the David Liebman Big Band's "Tribute to Wayne Shorter." His 2000 debut, "Gualala," and 2002 effort, "Paths," team him with multi-reedist Charles Pillow. His other recordings include "Americana" (2003) and "Kailash" (2007), on which he joins the Kailash Trio.

Scott Neumann attended North Texas State and, before moving to New York in 1988, played with the Woody Herman Orchestra for a year. On his 2006 album, "Osage County," he led a quartet including pianist David Berkman and saxophonist Sam Newsome; he recorded "Blessed" in 2014 as part of the Neu3 Trio, with Michael Blake and Mark Helias. A busy player on the New York scene who has collaborated with such luminaries as Kenny Barron and Ben Allison, Neumann has also accrued impressive credits as a vocal accompanist, a Broadway musician, and educator (he directs the drum studies program at Lehigh University).

Spin Cycle will be performing a CD release show at Smalls, NYC, on Friday 4/13. They've also scheduled several appearances in Ohio, including a concert and master class at Youngstown State (Bliss Hall), in Youngstown, 1-4pm on 4/5; concert at Andrews House, Delaware, OH 4/6; concert with Denison University Jazz Band, Granville, 8pm on 4/7; and the Bop Stop in Cleveland, 4/7.