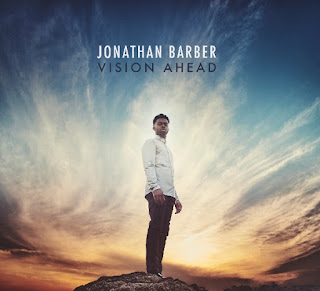 Hartford, Connecticut-native Jonathan Barber is proud to announce his arrival with the Friday, May 11th release of his highly-anticipated debut album "Vision Ahead." Featuring pianist Taber Gable, guitarist Andrew Renfroe, saxophonist Godwin Louis, bassist Matt Dwonszyk, and vocalists Denise Renee and Sasha Foster (collectively and eponymously known as the album title), "Vision Ahead" is Barber's product of six years spent cultivating a distinct and immaculately tailored sound with like minded musicians who, together, now present themselves as an undeniable, sonically-solid unit. "Vision Ahead" serves as a showcase of the fresh prospects that can be envisioned and the greatness that can be achieved when one is forced to face unanticipated, desolating life-challenges.

Upon hearing the devastating and unexpected news of his one and only brother's death in November 2016, Barber struggled to comprehend life, and the purpose of his own, individual fore-planned and foreseen envisage slipped out of his understanding.

"I became confused with the direction that life was taking me and numb to the new norm that instantly presented itself to me; for it was that stand still moment the words "Vision Ahead" became the theme of my next chapter in life."

Sonically, "Vision Ahead" not only paints a picture of fresh perspective but one of perseverance. Aside achieving goals through adversity, it is a creation of polished craft and art that strives to breakthrough in a music industry that lacks the attention of an intellectual artist.

"My music not only helped me through my grieving process, but sparked a fresh musical style in hopes of carrying on the spirit of this American art form; jazz." 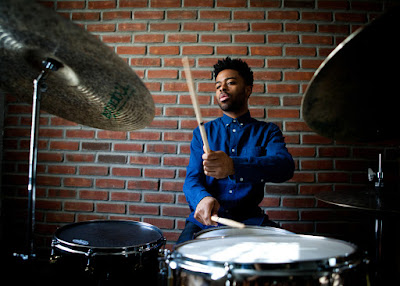 Eight out of the twelve tracks on "Vision Ahead" were personally composed by the young musician, named Best "Up & Coming" Drummer in the 2018 Modern Drummer Readers Poll. "Think On These Things" was the first composition that Jonathan Barber wrote for the album back in 2015. At the time there were no lyrics written but Barber wanted to write a ballad that reflected upon positive thinking. Inspired by the scripture Philippians 4:8, Barber aimed to portray the message that "you are what you eat and you become what you think." After the passing of his brother the lyrics came to him.

The rhythm of the title track's intro played by Andrew Renfroe lays perfectly with the syllables of the name "Vision Ahead" (spelling out the word "Vision" and saying the word "Ahead"). As the title track lifts into solos, the band provides an open section for Renfroe to let his fiery lines ring in the air.  Towards the end of Renfroe's solo he gives a call and response cue for Godwin Louis to step up to the plate and swing over the classic chord changes of Benny Golson's "Stablemates".  Once Louis is finished telling his story he cues the band to go to the bridge of "Vision Ahead" which is looped for Taber Gable's solo. Lastly, the solo section ends with Barber soloing over the intro creating a pulsating vamp. Keeping the "Vision Ahead" theme Barber sets a whirlwind of rhythms on top of this syncopated vamp. Collectively these musicians demonstrate how to take the language played by Jazz Masters and interprets it into an original composition.

Originally written by pianist Eldar Djangirov, the seventh track off the album, "Airport" lifts off into the sky from the start. While flying to Europe on a music tour Jonathan Barber was listening to this song played by Djangirov and his trio, and inspired by the melody played in the high register on the piano, Barber began to set lyrics to this classic gem. The lyrics have a double meaning. In one sense they shine light on the function of an airplane; flying all over the world, transporting people to various destinations and living its purpose in the sky. The second message behind the lyrics is one of encouragement, to chase dreams. "Airport" is well executed, presenting a song that expresses vision and freedom.

"Believing in the Reunion" was the last composition that Jonathan Barber brought to the band. Its initial propose was designed to be the final statement to another composition. At the time it just seemed like a blueprint. Close to the end of day one in the studio, Barber wanted to record this sketched track, just to have it on file. Still unsure of the total outcome, a plan was made at that very moment. After hearing the completion of this composition in the mixing process, Jonathan knew that this song had to be a song by itself. For 1 minute and 40 seconds these musicians challenge the concept of time; There's no time signature to this composition. This closing track is played off of the present moment. Barber began to reflect about the afterlife and what reuniting with loved ones who have passed away might sound like. Would it be confined into 4/4, 3/4 or 7/8 time? Or would it sound like this composition - no time just motion.

"Collectively we capture the deep emotion and the intention that encompasses the compositions of these songs."

This tightly-knit ensemble has successfully created an album of hope and positivity. Whether itʼs graduating from The Jackie Mclean Institute of Jazz or being natives in the State of Connecticut, the seeds that were planted in one of the smallest states in the U.S. are still growing.

MORE ABOUT JONATHAN BARBER
Jonathan Barber was first introduced to the drums by his father and began nurturing his passion and talents at his family church. During his senior year of high school, Barber became a member of the Artists Collective in Hartford, CT founded by Jackie and Dollie McLean. There he studied with master artist, Renee Mclean, who introduced him to jazz and its African roots and rhythms; it was at that point Jonathan knew he wanted to be a musician. He furthered his studies at the University of Hartford, Hartt School of Music, Jackie McLean Institute of Jazz, where he graduated Cum Laude, receiving a B.A. in Music Performance (Jazz Studies).

In May 2017 Jonathan debuted in his own international tour, traveling all over Japan. In January 2018 Jonathan was named best "Up & Coming" drummer in the Modern Drummer Readers Poll. Jonathan endorses Canopus Drums, Istanbul Agop Cymbals, Evans Drumheads, Promark Drumsticks and Sunhouse Percussion.

"I recognize my God given gift. Maximizing this gift to its full potential is the best thing you can do for yourself. Operating in this gift is how you give back to the world."
Posted by Arnaldo DeSouteiro at 7:08 PM