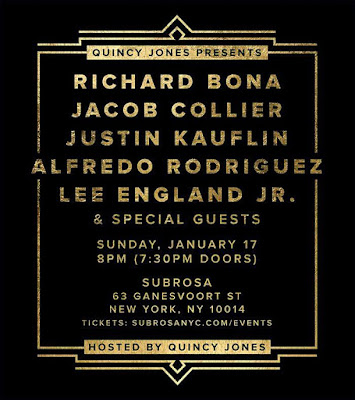 Join Quincy Jones as he hosts his roster of multi-talented musicians in an intimate NYC jam session at Subrosa. You'll hear from Grammy® nominated artist and SACEM Grand Prize Winner, Richard Bona, along with the Afro Cuban Project and Mandekan Cubano; 21 year old Jacob Collier who is known for his viral YouTube videos and has been hailed as "Jazz's New Messiah" and "The Future of Music" by The Guardian and Jazzwise Magazine respectively; an undeniably rare talent and blind pianist, Justin Kauflin, who is the subject of the award-winning documentary Keep On Keepin' On; Alfredo Rodriguez, a Grammy® nominated pianist, arranger, and composer who will be performing material from his upcoming album, set to be released in March 2016; and Lee England Jr., a classically trained violinist and composer who is one of the only non-athletes signed to the Jordan brand.

You'll have the unique opportunity to hear these talents up close and personal at the first ever showcase combining this roster of artists. Experience the excitement and range of emotions associated with a wide variety of styles such as jazz, R&B, classical, hip-hop, and more--you also never know what special guests may show up! See you there!
Posted by Arnaldo DeSouteiro at 5:17 PM