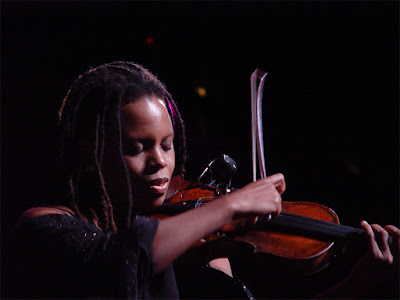 Samir H. Köck talks to the British saxophonist John Surman about the cold of his adopted home Norway, about the influence of nature on his music, about British folk melodies and the road to his own sound, and about the unpredictability of his music ( Die Presse). --- Matthew Everett talks to the violinist Regina Carter about having learned how to play jazz like a saxophonist because her university had no formal jazz violin program, about there being no jazz or no-jazz instruments but only musicians who choose whatever music they want to play to express themselves, about her next project which will celebrate Ella Fitzgerald, and about her favorite configuration to work with being the big band ( Knoxville Mercury).

Samir H. Köck talks to the Austrian drummer Wolfgang Reisinger about music on the radio, about his road to the drums, about the Vienna jazz scene of the 1970s, about having to work as a driver for a while, and about the need to take risks when playing jazz ( Die Presse). --- In a lengthy article, Adam Schatz talks to the saxophonist Kamasi Washington about the story behind the title of his three-CD album "The Epic", about the Inglewood neighborhood in Los Angeles where he lives, about having been called the "jazz voice of Black Lives Matter", about always having wanted to be a "positive force in the world", about his father testing the seriousness of his 13-year-old son to become a jazz musician by having him sing a Charlie Parker solo note for note, about his obsession with John Coltrane's music, about studying with Gerald Wilson and playing with Snoop Dogg, about categories such as "jazz" ghettoizing forms of music, about working with Flying Lotus (Steven Ellison), and about the meaning of his name, Kamasi ( New York Times).

Eliana Yu talks to the drummer Sherrie Maricle about playing with and directing the DIVA Jazz Orchestra, about the repertoire of the band, and about the need to adapt the performance to the audience and the venue at every concert ( Purdue Exponent). --- Marcus Crowder talks to the singer Luciana Souza about her latest album, "Speaking in Tongues", about working with the guitarist Lionel Loueke, the harmonica player Grégoire Maret and the drummer Kendrick Scott, as well as about the job of producer (and husband) Larry Klein for the album ( The Sacramento Bee).

Christina Schlie talks to the German trumpeter Ingolf Burkhardt about his instrument being a constant companion, even on family vacations, about the need to practice his horn whether for his own projects or his work with the NDR Bigband, about his road to becoming a professional musician, as well as about his musical aesthetic and wanting to reach a broader audience with his music ( Hamburger Abendblatt). --- Ueli Bernays reports about economic hardships for jazz musicians in Switzerland and the fear for their existence, about the fact that most musicians will have to finance their CD productions without ever making money of it, about for-the-door concerts which won't help either, about the surplus of musicians in Switzerland being a result of jazz schools in the country and about the main pillar for many musicians being teaching jobs, be it private lessons, at schools, music schools or music universities ( Neue Zürcher Zeitung).

Greg LaRose ( New Orleans Times-Picayune ) and Sam Darcangelo ( OffBeat) report that trumpeter Irvin Mayfield and the New Orleans Jazz Orchestra, both of whom had been accused of improperly using $1 million from the New Orleans Library Foundation have decided that the funds had actually been used properly and thus they would not have to pay the money back. --- James Karst reports about the drummer Black Benny Williams who had been a New Orleans legend in the early years of jazz, many years later still remembered by the likes of Louis Armstrong and Sidney Bechet, who died in 1924 after having been stabbed by a jealous lady and after having been one of the first patients to receive a blood transfusion, leaving no recorded document of his music behind ( New Orleans Times-Picayune).

Ulrich Kriest ( Stuttgarter Zeitung) and Thomas Morawitzky ( Stuttgarter Nachrichten ) report about a concert honoring the German pianist Wolfgang Dauner who also received an award by his home state of Baden-Württemberg from the hands of the state's vice governor Nils Schmidt after which Dauner, asked whether he had anything else to say, quoted Charlie Parker who supposedly after receiving an award simply proclaimed, "I would rather play something now..". --- Phillip Morris reports about discussions about ethnic diversity at Oberlin College's jazz program and about student demands to rename one of the campus buildings in honor of the creator and longtime director of Oberlin's jazz department ( The Plain Dealer).

Last Wednesday the Mainz JazzTalks focused on women in jazz. The well-attended evening was framed by three music ensembles; in between the saxophonist Angelika Niescier, the publisher Christine Stephan, the festival promoter Nadin Deventer and the moderator Wolfram Knauer discussed several aspects of female participation in the jazz business. The Mainz JazzTalk was recorded by SWR radio and will be broadcast on 1 March 2016 (SWR2, 9:03-10:00pm). Klaus Mümpfer reported for the local press ( Allgemeine Zeitung).

On Friday Jasper van't Hof and Reto Weber performed at a JazzTalk concert in the Jazzinstitut's concert space. In the on-stage conversation they spoke about instruments (Weber played an assortment of percussion instruments including the Hang which he had helped to conceive), about improvisational approaches, and about the necessity to include the audience in the performance. Cristina Weber reported for our local newspaper ( Darmstädter Echo).
Posted by Arnaldo DeSouteiro at 8:07 PM