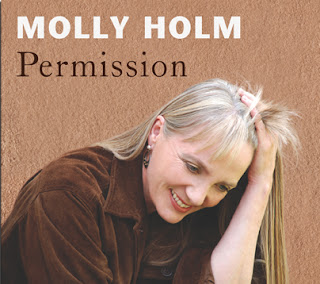 Special Guests: Bill Bell (piano), Marc van Wageningen (electric bass), Paul van Wageningen (drums), Eddie Marshall (drums), David Frazier (percussion) & Wayne Wallace (trombone)
**********
So far the best vocal jazz album of the year, "Permission" is an exercise in creativity and a lesson in adventurous music. It's a completely unpredictable album, full of surprises on each and every track. A top class vocalist that doesn't wants to be "the next Diana Krall" neither "the next jazz-cabaret sensation a la Jane Monheit" with all the clichés associated to both, Molly Holm expresses her own voice through a program of challenging originals and gems of the modern jazz.

Some of them are jazz classics by Monk, Mongo and Mingus, two are cult tunes by Corea and Zawinul, only one is a GAS standard (the hauting ballad "You Don't Know What Love Is," in a voice/piano duo with Bill Bell), but all are treated with invention and grace. The way Molly re-works Mongo Santamaria's "Afro Blue" (with lyrics by Oscar Brown, Jr.) sounds specially attractive to me, 'cause she caresses the melody in a way that totally differs from Dianne Reeves' fiery version. Molly's take also burns, but "slowfiring" on you.

I'm also glad to see she chose to record Charles Mingus' "Goodbye Pork Pie Hat" with the poem created by Rahsaan Roland Kirk for his 1975 WB album "The Return of the 5000 Lb Man," instead of using Joni Mitchell's alternative set of lyrics.

Other highlights: a short take on Thelonious Monk's "Straight No Chaser" (with lyrics by Leon Thomas), Joe Zawinul's "Go There Now" (lyrics by Paul Kreshka to the tune originally recorded by Cannonball Adderley back in 1967, with Joseph on piano, as "74 Miles Away"), Chick Corea/Neville Potter's forgotten tune "Sea Journey" -- composed during the RTF days for Stanley Clarke's debut album "Children of Forever" --, plus some intriguing Holm's originals like "Improvised Raga" (a duo with Marc van Wageningen, a bassist heavily influenced by Jaco Pastorius, as shown also on "Sea Journey"), the a cappella "Secret Words," the lyrical "Something Blue" (featuring the tenor sax of Larry Schneider, one of my idols since his association with Bill Evans on "Affinity" and "We Will Meet Again"), and "The Bear" with a Vocal Orchestra under the influence of her mentor Bobby McFerrin.

For those who were not familiar with Molly Holm's visionary presence on the Bay Area music scene for over three decades, we must list her musical activities as an original member of Bobby McFerrin's Voicestra, as a featured singer with Terry Riley and Zakir Hussain, as a Mills College adjunct faculty member. Her far-ranging artistic pursuits, however, have not included recording an album of her own -- until now. Holm's overdue and highly anticipated debut, "Permission" (released on her own Rinny Zin imprint), showcases her unique, fully-formed jazz vocal artistry.

"It is a debut in the sense that it is her first official offering under her name," writes CD annotator Tarabu Betserai Kirkland, "but given her long and extensive career as a jazz vocalist, improviser, composer, ensemble director, arranger, and educator, 'Permission' is more of a continuum than a prologue."

"Permission" combines classic songs with six original compositions, some sporting her richly poetic lyrics. Holm's "The Bear" is a gorgeously harmonized a cappella piece performed by ten Bay Area singers, including Linda Tillery, Rhiannon, Raz Kennedy, and Nicolas Bearde, and was inspired by her former Mills instructors Pandit Pran Nath and Terry Riley. On the disc's opener, "Improvised Raga," Holm sings non-word syllables in the Kirana tradition of North Indian raga derived from Pran Nath, one of her major mentors.

"Instead of waking from a dream, I feel like a dream has awakened me!" says Holm. "I've had such wonderful opportunities throughout my performance career -- working with, and learning from, diverse and highly-acclaimed artists who know how to push the envelope. And now, to finally bring together my own musical ideas into a single recording, I have to say it does my soul good."

Besides members of Holm's own band -- pianist (and CD producer/arranger) Frank Martin, bassist Jeff Chambers, drummer Deszon Claiborne, and trombonist Wayne Wallace -- the participants include drummer Famoudou Don Moye, soprano and tenor saxophonist Larry Schneider (famous for his work on the Bill Evans/Toots Thielemans legendary "Affinity" album for Warner Bros.), vocal percussionist Antonia Minnecola, pianist Bill Bell, bassist Mark van Wageningen, percussionist David Frazier, the late drummers Paul van Wageningen and Eddie Marshall, and some of the key singers who, like Molly, sang in the original Voicestra. All, with the exception of Art Ensemble of Chicago member Moye, are based in the San Francisco Bay Area.

Born in Salem, Oregon in 1954, Molly Holm grew up hearing Mingus, Ellington, Ella Fitzgerald, and Sarah Vaughan around the house and impromptu singing with her jazz-fan mother and four siblings. Joni Mitchell and Laura Nyro were important early vocal influences. "In high school," Holm recalls, "I learned to sing by listening to them. I didn't take voice lessons till I was 23."

Holm moved to the Bay Area at 18 to study at Mills, but followed a circuitous path of singing and study elsewhere before returning to complete her bachelor's degree in 1979 and a master's in composition in 1982. Her classes at Mills with Pandit Pran Nath, Terry Riley, and W.A. Mathieu had a lasting impact on her own music.

"One of the most important things I learned from Terry is that he's not afraid to just try anything," says Holm. "He doesn't seem to have any self-consciousness if he makes a mistake. I try to emulate that freedom, that lack of worry about making mistakes."

Bobby McFerrin first encountered Holm when she was directing a 14-member choir called Jazzmouth. He tapped her to run the yearlong auditions for an a cappella vocal ensemble he was putting together, and in 1986 she was one of ten singers handpicked to join him in that innovative new vocal orchestra, Voicestra.

"Bobby came up with the idea to use a group of singers by leading the improvising himself," she says. "He'd do the improvising and give the singers a repetitive part-circle singing or what we used to call 'add a part, change a part.' It was a huge thing to learn from him."

Holm subsequently used these lessons in various singing groups she's led, including her new women's group, Molly Holm and The Impermanent Ensemble; in classes she's taught at Folsom Prison, the California Medical Facility in Vacaville; and for the past 14 years as an adjunct faculty member at Mills.

In addition to her work with ensemble singing, Holm has self-produced concerts as a solo vocalist with rhythm-section support in years past, one of which led writer Fred Setterberg to describe her voice as "a fluid, birdsong alto, winding and lilting, with barely a hint of vibrato; a voice like the woody middle register of a clarinet." Her new CD gives her, well, permission to explore more deeply this aspect of her music.