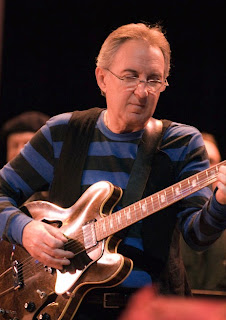 Another of my musical heroes passed away: Hugh McCracken, often mispelled Hugh MacCracken. In terms of electric guitar, he was the equivalent to what Jay Berliner and Gene Bertoncini represent to acoustic guitar. There's a good obituary below, written by Pierre Perrone to The Independent, focusing on his work with pop and rock stars like Paul McCartney, John Lennon, Alicia Keys and Steely Dan.

But there's not a single line about his tremendous contribution to jazz sessions. Btw, I first noticed McCracken on Ron Carter's "Yellow & Green" album for CTI, on which he also played harmonica. (Ron was one of Hugh's biggest fans, and invited him to many other sessions like "Pastels," Ron's debut for Milestone, backed by Don Sebesky's scores, as well as "Pick 'Em," featuring Hugh playing harmonica on the title track.)

A "first-call" musician (I hate the term "session player"), McCracken played in over 500 pop/rock/soul albums, and in over 200 jazz albums. Still in my childhood, I was also impressed by his performance on Roberta Flack's "Quiet Fire" and Aretha Franklin's "Let Me In Your Life" (both on Atlantic), followed by Bob James' debut on CTI, "One."

Back in 1971, the ATCO label released "Mike Corbett & Jay Hirsh with Hugh McCracken." For the Congress label, McCracken recorded a single as a leader, with the songs "What I Gotta Do To Satisfy You" and "Runnin' Runnin'." A rare/cult 2-LP set issued on CTI, "Genealogy of Crossover Guitarists," lists Hugh as main performer on the title track from Ron Carter's "Yellow & Green." Another track that showcases his talent on harmonica is Stanley Clarke's "Taxi Blues" from Fuse One's self-titled first album. When I produced Deodato's compilation "Do It Again" for Verve, in 2007, one my first choices was "Funk Yourself," which features McCracken's frenetic rhythm guitar. Rest in Peace, Hugh!
http://www.independent.co.uk/news/obituaries/hugh-mccracken-guitarist-who-worked-for-lennon-and-mccartney-8579183.html

The list of credits amassed by the New York session guitarist Hugh McCracken from the late 1960s to the mid-noughties reads like a who's who of popular music and includes the delightful 1970s coffee-table classics Young, Gifted And Black by Aretha Franklin, Abandoned Luncheonette by Daryl Hall & John Oates, Paul Simon's Still Crazy After All These Years and Roberta Flack's Feel Like Makin' Love, as well as Katy Lied and The Royal Scam by Steely Dan.
His understated prowess prompted Paul and Linda McCartney to try to enlist him into the first line-up of Wings after the wonderful contributions he made to their chart-topping album Ram, most notably the solo on the opening track "Too Many People", and the simpatico picking and crisp riffing on their 1971 US No 1, the Noel Coward-meets-Abbey-Road medley "Uncle Albert/Admiral Halsey".

"This song represented a breakthrough in our musical relationship," McCracken recalled. "Paul is a genius. He sees and hears everything he wants, and would give specific instructions to me and the drummer [Denny Seiwell]. But he didn't know what he wanted the guitar part to be like on this song. I asked him to trust me and he did. After I came up with the parts, he was very pleased. For the rest of the record, Paul let me try things out before making any suggestions."
After McCracken backed Gary Wright, who had been a member of Spooky Tooth, on a European tour in the summer of 1971, he and his wife joined the McCartneys and Seiwell in Scotland, but he turned down their offer to join Wings. "He was such a New York guy that he didn't really like to be away from America," said McCartney when talking about Ram last year. "New York is such a satisfying town, you can walk one block and get anything, whereas you can't do that in the Mull of Kintyre."

By October 1971 McCracken was indeed back in New York, recording "Happy Xmas (War Is Over)" with John Lennon, Yoko Ono and the Plastic Ono Band. After finding out that the guitarist had worked with McCartney, Lennon remarked that Ram had just been "an audition to get to me. He said you were all right."
McCracken reconnected with Lennon and Ono for Double Fantasy, the comeback album issued three weeks before Lennon's murder in December 1980. "Like Paul, he was extremely intelligent and aware of what he wanted in the studio," said McCracken of the sessions that included "(Just Like) Starting Over", "Woman" and "Watching The Wheels", and several tracks released posthumously on Milk and Honey in 1984. "But you'd never find two more diametrically opposed personalities. I was working on Double Fantasy at the time of his death. How long did it take me to recover from that night? I still haven't recovered."

Born in 1942, McCracken grew up in New Jersey in a music-loving family. His plumber father led a dance band at weekends while his mother worked in night-clubs. She also played country music around the house, undoubtedly inspiring the picking style that was one of his trademarks.

His chief motivation when he began playing the electric guitar his mother bought him in the mid-1960s was to impress girls, but he learned music theory and became a versatile musician, able to switch to banjo or acoustic guitar, as well as harmonica, and to contribute arrangements and production ideas when necessary. His breadth of styles also embraced the jazz and rhythm and blues he picked up from a friend's record collection. This enabled him to shine when his mother got him an audition with the saxophone virtuoso King Curtis, who hired him for his 1961 album Trouble In Mind.
He took up the stage name Mack Pierce to gig in a cover band called The Funatics, but reverted to his real name when he released a gritty garage single, "You Blow My Mind", in 1966. He quickly became an in-demand sessioneer, helping The Left Banke realise the baroque pop of several tracks on their Walk Away Renée/Pretty Ballerina debut album and contributing to Van Morrison's debut solo hit "Brown Eyed Girl" as well as Neil Diamond's "Girl, You'll Be A Woman Soon", all in 1967
He can be heard on the bubblegum recordings of the fictional band The Archies and played rhythm guitar and traded solos with blues giant BB King on his 1969 crossover album Completely Well. Equally comfortable backing the singer-songwriter Laura Nyro on the epochal Eli and the Thirteenth Confession (1968), Johnny Hallyday on a rare New York outing entitled Flagrant Délit (1971) or the soul-jazz vocalists Eugene McDaniels and Marlena Shaw on a run of albums that became rare groove favourites, he was also part of the coterie of Big Apple musicians who moonlighted in Mike Mainieri's experimental jazz-rock outfit White Elephant Orchestra. These included fellow guitarist David Spinozza, who committed a faux pas by accepting another booking after starting work on Ram, and was replaced by McCracken on Denny Seiwell's recommendation.

McCracken, who died of leukaemia, was a stalwart of many Steely Dan sessions, excelling on "Hey Nineteen", one of the definitive tracks on Gaucho (1980), Donald Fagen's solo homage to radio The Nightfly (1982), and the Dan's Two Against Nature (2000) and Everything Must Go (2003). His résumé ran the gamut from saxophonist Tom Scott's New York Connection (1975), with both him and George Harrison playing slide, to The Diary Of Alicia Keys (2003), featuring the worldwide hit "If I Ain't Got You".