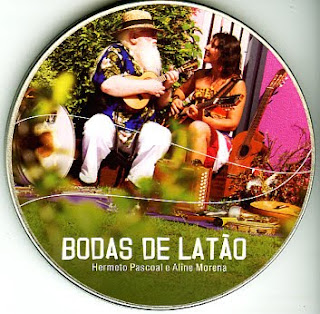 Hermeto is the greatest genius of universal music. And Aline's privileged voice is another "instrument" on Hermeto's very personal "orchestra." Both are tremendous multi-instrumentalists, here performing piano, keyboards, several kinds of acoustic guitars & other string-instruments (from "viola caipira" to "cavaquinho"), melodica, drums, percussion, flutes etc. Thus, here's our Universal CD of the Month, engineered by Beto Japa, and ingeniously packaged in a unique tin cover by graphic designer Adriana Alegria, with plenty of pics by Rudi & Zana Bodanese.

Their pairing started new chapters in both their private and musical lives, with this second "duo CD" being the latest samples of the high creative levels reached by these soul-mates.
The entire project is superb, but my personal favorite tracks are "Nenhum Talvez" (aka "Nem Um Talvez," originally recorded by Miles Davis with Hermeto in 1970's "Live Evil," later re-arranged by Hermeto himself for Robertinho de Recife's long-forgotten masterpiece "Robertinho No Passo," and now beautifully recreated with Portuguese lyrics added by Aline), "Casa di Xaquér," "Capivara," "Túnel" (previously heard on Airto's and Sivuca's albums from the '70s), "Terra Brasil," and a haunting performance of Astor Piazzolla's "Años de Soledad," the only song on the project not composed by Hermeto or Aline either. There are also 2 bonus "audio-video" tracks, filmed in a river and in a farm in the State of Paraná (Brazil), where the full project was conceived & recorded: "Garrote" (featuring Aline's unbelievavle tapping) and "O Ovo" (yes, that "old" song from the Quarteto Novo days, now with fantastic lyrics).
One of the best albums of 2010! 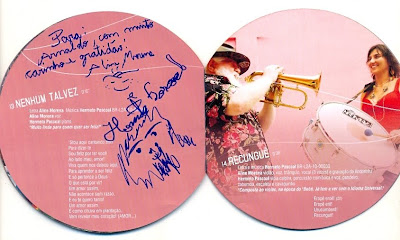 The CD is already available here in the USA through the DustyGroove store, and you can order it on-line via the link below:
http://www.dustygroove.com/item.php?id=hrjzss239p&ref=browse.php&refQ=kwfilter%3Dhermeto%26amp%3Bincl_oos%3D1%26amp%3Bincl_cs%3D1

That's what DG says about the album:
An amazing little record from Hermeto Pascoal and Aline Morena – even better than their last album together, with a sparkling spirit that grabs us right from the very first note! Aline seems to have breathed a new sort of life into Hermeto – and has given his music a sense of joy that we haven't heard in quite a long time – that soaring, buoyant, almost effervescent energy that came from his unique blend of jazz modes and Brazilian rhythms! Aline sings on most numbers – usually scatting in this cool instrumentalist way – and the other instrumentation is pure Pascoal all the way through. Titles include "Terra Brasil", "Bem Coladinho", "Casinha Do Olho D'Agua", "Capivara", "Casa Di Xaquer", "Futricando Na Rua", "Viagem Do Subconsciente", and "Nenhum Talvez" – and CD features 2 bonus multimedia tracks, too!
Posted by Arnaldo DeSouteiro at 3:02 PM